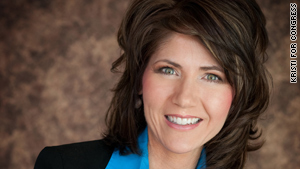 Kristi Noem is the Republican congresswoman-elect from South Dakota.

Watertown, South Dakota (CNN) -- South Dakota's congresswoman-elect Kristi Noem is not exactly a household name, but that could soon change.

However, that's not why her star power may be on the rise.

Having her in this position could help the new House Republican majority with two issues: bringing someone associated with the Tea Party movement into the leadership fold and adding another woman.

However, during her campaign for the state's sole at-large U.S. House seat, Noem maintained a certain amount of distance from the Tea Party, and avoided inflammatory statements, according to some political experts in the state.

Though she welcomed Tea Party support, "She resisted attempts -- and certainly the other side attempted -- to put her in that radical camp, the Sarah Palin/Tea Party camp," said Sioux Falls Argus Leader political reporter Jonathan Ellis.

Tea Party issues aside, Noem has been criticized often over the past year for her lack of a four-year college degree and her less-than-stellar driving record which has been widely reported to include 20 speeding tickets, six court notices for failure to appear and two arrest warrants.

On the topic of her secondary education, South Dakota State University political science professor Gary Aguiar said that she took classes at several schools in the state, but quit years ago to help out on the family farm after her father's death. She eventually returned and was most recently studying political science at SDSU.

Her education was put on hold, however, before she ran for Congress.

"In some situations [politicians new to Washington] who didn't have college experience sort of felt out of their element and weren't able to grasp all of the complexities of policy," said Aguiar, who also served as Noem's academic adviser.

Federal guidelines prohibit him from discussing a student's performance in class, but he describes the Congresswoman-elect as "genuine," "down-to-earth," "hard-working" and "intelligent."

"She's able to grasp difficult ideas very easily," he said. "She asks questions. She challenges people -- pretty much what you'd want in a member of Congress."

Noem was elected to South Dakota's state House of Representatives in 2006, and has been the assistant majority leader the past two years. Her time serving as a state lawmaker even earned her internship credit at SDSU.

"I said [to her], 'You're already serving. Why don't you get credit for it and just write a little paper at the end?' " Aguiar said.

AnnRae Herr runs a local coffee and sandwich shop in Watertown, South Dakota, a shop she purchased from Noem's mother.

"Kristi would come back like every other weekend and help out with payroll," Herr said of Noem's work at the shop. Noem was always "level-headed and calm," she said.

Herr express confidence in Noem as a representative of her state.

Noem is "a good listener [and] she asks good questions," so if she were thrown in the deep end she'd "learn to swim real fast," said Herr.

"I think she'd really, really spend the hours to learn what needed to be done. ... I've always gotten the impression that 'good enough' isn't part of her vocabulary, no matter what she's doing."

Noem's driving record is not a factor for Herr, and she laughed at the notion that Noem has been compared to Sarah Palin.

"Hmm, OK well, yea they are both female, and yes they are both cute and are go-getters for their state," but other than that, Herr said, she's not sure about the comparison.

"I think [Kristi Noem] is more articulate than Sarah Palin, which isn't saying much unfortunately," Wilka said. "[But] she is a pretty good public speaker."

But Wilka said Noem is still "not analytical enough or educated enough to really understand the legislative process."

"The speeding tickets never bothered me because everybody does that," Wilka said.

"What bothered me was the failures to appear in court and warrants for her arrest. I just think that's very irresponsible."

Still, she won the election, and Wilka said he "wishes her well."

But not only did she win, she beat out incumbent Stephanie Herseth Sandlin, a woman who, in 2008, won almost 70 percent of the vote and was re-elected by one of the largest margins in the state's history. Some pundits chalk Noem's win up to the fact that it was simply an anti-incumbent year.

One issue for Noem that never played out much in the campaign, but could come back to haunt her involves reports that Noem's ranch has received millions of dollars in federal subsidy money. Noem and her husband Bryon also own and operate an insurance company, which offers, among other things, crop insurance. That and federal subsidies have been labeled wasteful by the establishment GOP, who've said in the past that taxpayers should not be footing the bill for farmers.

Her husband Bryon defended the insurance subsidies to CNN saying they're "providing legitimate services" to farmers of the state.

"We're just trying to make a living in South Dakota," he said.

Kristi Noem declined an interview for this profile.

CNN's Kevin Conlon and Dana Bash contributed to this report.