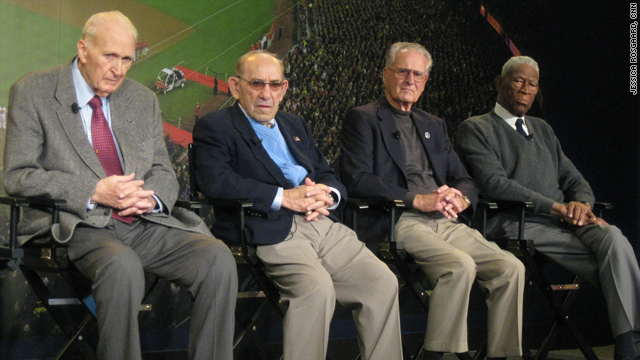 (CNN) -- In the days before there was an organized baseball draft, there was a military draft.

In September 1940 as the United States braced for a possible entry into the war, President Franklin Roosevelt signed the Selective Training and Service Act into law, requiring all American males ages 21 to 36 to register for military service.

"Back in that time, everybody expected to go," said Brissie, a paratrooper and Major League pitcher. "There was a big discussion about shutting down baseball for the duration, but President Roosevelt imposed on us to keep it going."

America's entry into World War I had cut short the 1918 baseball season, and many feared the same, or worse, would be true in 1942. That January, President Roosevelt sent what has come to be known as the "Green Light Letter" to baseball Commissioner Kenesaw Mountain Landis, suggesting the importance of keeping Major League Baseball during the war.

"I honestly feel that it would be best for the country to keep baseball going," the president wrote back the next day.

"I think Roosevelt recognized we were going to ask a lot of the American people: ask women to work, ask people to work double-time," said Robert Ruck, a history professor at the University of Pittsburgh. "They ought to have a chance to watch baseball and unwind."

"Fifteen million Americans served," he said, "and virtually every American family had somebody involved in the war, or they went to work in the defense plants to mount that war."

Before Berra earned 10 World Series championships with the New York Yankees, he volunteered for the U.S. Navy and participated in the D-Day landing at Normandy.

"I enjoyed every minute of it," Berra said. "I thought it was like the Fourth of July when I made Normandy."

Coleman postponed his professional baseball career to serve in World War II as a Marine Corps aviator. He earned a Distinguished Flying Cross for his service.

"Flying an airplane is a clean war," he said. "I had my roommate blow up in front of me and had other men that were killed on the runway, or disappeared on missions. Air war, of course now you don't see your targets -- they got them on radar, they're 20 miles away and you get 'em. If something happened, you never really saw the blood, the gore, the real desperation and death."

After the war Coleman joined the Yankees and was voted Rookie of the Year. In May 1953 his baseball career was disrupted again. He was recalled to service in the Korean War, where he earned a second Distinguished Flying Cross.

Coleman is the only former Major League Baseball player to see combat in two wars.

Miles, an original member of the Tuskegee Airmen, entered the military in 1942. His baseball career started in 1946 in the Negro Leagues.

"I didn't make a lot of money, but I had a lot of fun sleeping on the bus, eating on the bus, and dressing on the bus to get out and play a doubleheader, making $300 a month," he said. "And I enjoyed every bit of it. It was a great experience."