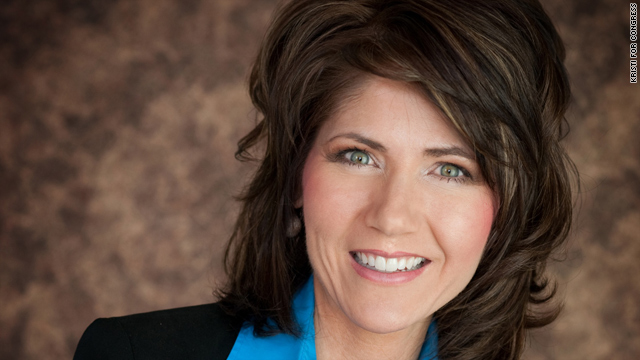 (CNN) -- Reports that incoming freshman Republican Rep. Kristi Noem is in the running for a leadership slot may have most people asking, "Who?"

Three senior House GOP leadership sources told CNN on Monday that they are planning to add a leadership slot for a freshman member.

In an interview on CNN's "John King USA" Tuesday, Noem said she is interested in the position.

"First and foremost my No. 1 goal is to be an effective voice for South Dakota, but I certainly am interested in the position," she said.

"So, if they are supporting me in that, I certainly appreciate that, but ultimately when it comes down to it it's my freshman class who will make the decision and I would expect them to send a strong voice to the leadership table."

The 38-year-old Republican has said her priority is getting government spending under control.

"I ran on the campaign that we needed smaller, more limited government, we needed to cut our spending, we needed to make some tough decisions to make sure small businesses could still survive and exist. And that resonated across South Dakota."

Noem is the assistant majority leader in South Dakota's House of Representatives.

As of last month, Noem wouldn't endorse presumptive House Speaker John Boehner as the next speaker, telling the Argus Leader newspaper's editorial board, "There could be several people running."

Noem lives on a ranch with her husband and three children and grew up farming and hunting with her family, according to her campaign website.

She attended Northern State University before transferring to South Dakota State University and taking classes at Mount Marty College, the website says, and has been working toward completing her political science degree.

Days before the election, Sen. John Thune, R-South Dakota, said of Noem, "Kristi is a terrific candidate. ... She's someone who represents the core values of the people across South Dakota," KSFY reported.

If Noem gets a leadership spot in the House, it could help the new House Republican majority with two issues: bringing someone associated with the Tea Party movement into the leadership fold and adding another woman.

Rep. Michele Bachmann of Minnesota, who also would fit those criteria, is running for caucus chair but is not expected to beat Rep. Jeb Hensarling of Texas, who also is running.

Rep. Cathy McMorris Rodgers of Washington, the House Republican Conference vice chair, is currently the only woman in the elected Republican leadership.