Debunking the myth: The cost of Obama's trip to Asia 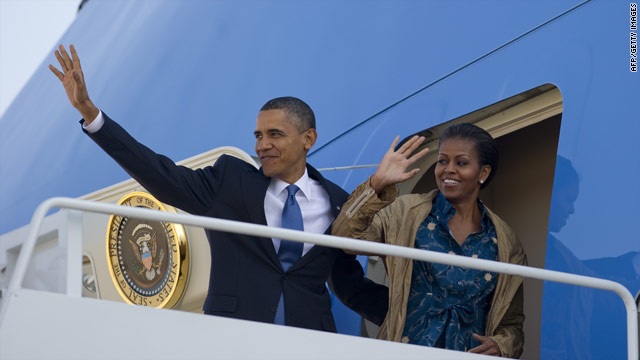 (CNN) -- It's a story that originated from a single, unnamed sourced in India -- but it quickly gained momentum, spreading like wildfire among critics of the Obama administration in the United States and eventually, the airwaves.

The claim: The United States will be "spending a whopping $200 million per day" on President Barack Obama's trip to Asia.

That's roughly the amount the federal government spends each day on the war in Afghanistan. The figure has been dismissed by the White House as "wildly inflated."

The former chief of staff for George W. Bush told CNN's Anderson Cooper in a Thursday interview that it doesn't pass the "sniff test."

"It doesn't to me, but I think the White House is appropriate in saying they don't talk about what it costs for the president to travel," said Andrew Card. "We want our president to be safe wherever he goes. I can't imagine it would cost $200 million a day.

"If it costs anywhere close to that number, the president should be asking tough questions of the Defense Department and the Secret Service and the State Department. But he should also be paying attention to keeping his entourage as small as credibly possible and still do the job that he has to do for the country as he travels."

While the White House has not released specifics on the cost of the trip, citing security concerns, White House spokeswoman Amy Brundage has said, "It's safe to say these numbers are wildly inflated."

Those numbers, according to Republican Rep. Michele Bachmann, are: $200 million a day, $2 billion total, 34 diverted Navy ships, a 2,000-person presidential entourage, and 870 hotel rooms in India.

Pressed by Cooper to back up her numbers, Bachmann said, "These are the numbers that are coming out in the press."

The press she was referring to is the Press Trust of India, one of the largest news organizations in that country. Its source for Tuesday's article on the cost of Obama's trip was based on a single anonymous source: "a top official of the Maharashtra government privy to the arrangements for the high-profile visit."

The Press Trust article was picked up by The Drudge Report and other sites online and quickly made its way into conservative talk radio, sparking outrage by the likes of Rush Limbaugh, Michael Savage and others.

The White House and Pentagon have fielded questions about the Indian report and have dismissed the claims in the article.

"I will take the liberty this time of dismissing as absolutely absurd this notion that somehow we're deploying 10 percent of the Navy, some 34 ships and an aircraft carrier in support of the president's trip to Asia," Pentagon spokesman Geoff Morrell told reporters this week. "That's just comical. Nothing close to that is -- is -- being done."

While the exact cost of Obama's 10-day trip to Asia is not known to the public, an examination of similar presidential excursions in the past support the likelihood that the $200 million-a-day figure is exaggerated.

For example, an 11-day trip by then-President Bill Clinton to Africa in 1998 involved about 1,300 people and cost roughly $3.5 million a day, according to the federal Government Accountability Office. That's about $5.2 million after adjusting for inflation.

According to figures from the U.S. Air Force, it costs more than $100,000 an hour to fly Air Force One, meaning Obama's 13-hour flight from Andrews Air Force Base to Mumbai would cost about $1.3 million. However, the trip also includes costs for support staff, Secret Service, equipment and hotels.

Obama's voyage, which began Friday, is intended to expand export markets and strengthen security cooperation in what he considers a region vital to U.S. interests.

The trip to India, Indonesia, South Korea and Japan encompasses a G-20 summit, an Asia-Pacific Economic Cooperation summit, major holidays in India and Indonesia, and bilateral talks with Chinese President Hu Jintao and at least five other leaders, as well as four presidential news conferences.

It's all part of an administration focus on Asia as a strategic region in the 21st century, said Ben Rhodes, the deputy national security adviser for strategic communications.

The president's itinerary in India includes a speech to the Indian parliament, a state dinner and a wreath-laying at the grave of Indian independence leader Mahatma Gandhi.