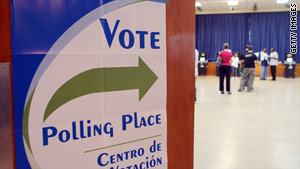 The midterm battle comes to the forefront tonight. It's Election Day in America, and you won't miss a result by following CNN, starting at 7 ET tonight.

(CNN) -- Against the backdrop of a bitterly divided Congress and an angry and frustrated electorate, the most expensive midterm election in history finally comes to a climax Tuesday as America votes on 37 Senate seats and all 435 seats in the House of Representatives.

Here are five things to watch as the day plays out:

218 is the number: Republicans need a net gain of 39 seats to reach the 218-seat majority needed to control the House. While most experts believe they'll win control of the chamber, it remains to be seen how big a margin they might have when the new Congress is sworn in next year.

What happens if GOP wins control of the House?

Republicans are also expected to make gains in the Senate but come up short of the 10 seats they need to win control there.

What's at stake in the Senate

If Republicans gain control of the House, look for them to take steps to try to roll back portions of health care reform; extend the Bush-era tax cuts, if the current Congress doesn't when it returns after the election; write legislation for targeted tax credits for small businesses, which they believe will spur job growth; and trim the federal budget by as much as $150 billion.

But without control of the Senate, they'll need Democrats there to vote with them to get bills passed. And then they'll need the signature of President Obama, who opposes at least parts of that agenda.

Turning out the vote: Polls show Republicans more energized than Democrats, which suggests a higher turnout of GOP voters. While Americans aren't happy with either party, they tend to vote against the one in power.

Video: Watch me vote for me

Obama has drawn large crowds lately in a series of rallies at college campuses to try to energize young voters, a key segment that helped elect him two years ago. The question is whether they'll come out to vote on Tuesday.

Midterm election at a glance

The year of the outsider: With so much frustration focused on Washington, incumbents began to fall in the primaries, and that wave is expected to continue Tuesday.

The insurgent Tea Party has had a major influence on the Republican Party and has some Democrats in close races distancing themselves from Obama and Democratic leaders in an effort to save their political careers.

How the Tea Party got started

While the number of winning "outsider" candidates will be determined Tuesday, the larger question won't be addressed until January, when the new Congress takes their seats: Will their influence in the House and Senate change Washington and will it further polarize it? Most analysts say an insurgent voting bloc will create an even more partisan Congress.

And how frustrated will voters be by the next time they get to select their legislative leaders?

What the Twitterverse is saying about the election

Speaking of 2012... The next presidential race begins with these midterms -- although if you live in an early-voting or key battleground state, you would have sworn that it's been going on for months, based on the number of visits by potential Republican candidates.

The early favorite among those who seek to unseat Obama will be the person who can make political capital out of the chits he or she has collected through endorsements and fundraising for winning House and Senate candidates.

2008 Republican vice-presidential candidate Sarah Palin has gotten much attention for endorsing Tea Party candidates in a number of high-profile races. But South Carolina Sen. Jim DeMint has emerged as a GOP kingmaker, with a string of underdog candidates whom he backed winning unlikely victories.

Palin is already looked on by the party establishment as unelectable, because she's a polarizing figure outside of the party's conservative base. But DeMint could take the blame if the GOP fails to win the Senate.

DeMint's candidates -- most notably Delaware's Christine O'Donnell -- beat establishment-backed Republicans in primaries, but are expected to have a tougher time in the general election.

When might we know the outcome? Several key races in the eastern half of the country could give a good indication of how the House will go. But with key Senate races in states out west -- including Alaska, where the polls don't close until 1 a.m. Eastern time -- some races won't be decided until Wednesday morning, if then. Alaska's Republican primary wasn't decided until incumbent Sen. Lisa Murkowski conceded a week after the vote, while absentee ballots were still being counted.

Now running as a write-in candidate, Murkowski is in a tight race with Tea Party-backed Joe Miller, who beat her in the primary, and Democrat Scott McAdams.

And remember, the last Senate race in 2008 wasn't decided until after an eight-month court battle gave the seat to Democrat Al Franken.