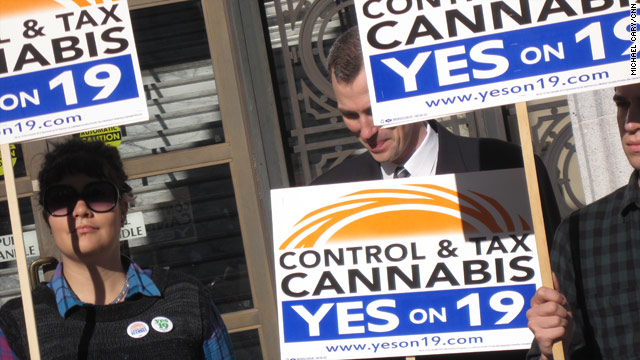 The midterm battle comes to the forefront tonight. It's Election Day in America, and you won't miss a result by following CNN, starting at 7 ET tonight. Share your election experiences with CNN iReport.

(CNN) -- California voters rejected the legalization of marijuana Tuesday, according to a CNN projection based on exit polling.

Supporters of Proposition 19 argued that the "prohibition" of marijuana -- much like that for alcohol decades ago -- has created a violent criminal black market, led today by international drug cartels.

But opponents prevailed Tuesday. They asserted that even if the proposition were to pass, federal law still prohibits individuals and groups from manufacturing, distributing and possessing marijuana for recreational use. U.S. Attorney General Eric Holder said he will continue to enforce that federal law. Opponents also said that driving under the influence of marijuana would be a public threat.

Supporters said the measure could have generated tax revenue from the $14 billion-a-year marijuana business in California and save the state hundreds of millions of dollars annually by ending the arrests of 61,000 Californians a year for misdemeanor marijuana possession.

A measure that would have legalized medical marijuana in South Dakota also failed, according to another CNN projection based on exit polling. Results were still pending for a similar medical marijuana measure in Arizona. A total of 14 states and the District of Columbia have already legalized marijuana for medical care only.

Meanwhile, among the many initiatives on ballots Tuesday, four states -- Utah, Arizona, South Carolina and South Dakota -- approved a measure that will guarantee workers the right to vote by secret ballot on whether they want union representation, according to CNN projections based on exit polling.

Business groups have opposed this draft legislation because, they claim, employees could be coerced into checking yes on a card to unionize. Workers rights groups say the proposed "majority sign-up" law would reduce opportunities for employers to threaten or fire workers wanting a union, said spokeswoman Zoe Bridges-Curry of the advocacy group American Rights at Work.

Meanwhile, Colorado voters were projected to reject an anti-abortion amendment that would have defined a "person" as "every human being from the beginning of the biological development of that human being," according to a CNN analysis of exit poll data.

Arizona and Oklahoma voters passed a measure Tuesday allowing residents to opt out of President Barack Obama's federal health care reform and its requirement that people have insurance, according to a CNN projection based on an analysis of exit poll data.

But in Colorado, voters rejected a similar measure that would give voters the option of not participating in the federal health care reforms, including the insurance requirement, according to a CNN projection based on exit polling.

The approvals were a rebuke of the administration's controversial health care reforms.

Experts question whether such state laws could be implemented because they seek to pre-empt federal law, and the matter could eventually end up in court, said Jennie Bowser, an elections analyst with the conference.

Voters in many states cast ballots on other controversial measures Tuesday, including balancing budgets.

In all, 37 states offered 160 ballot proposals, and the initiatives had no single unifying theme this November, unlike in 2004 and 2006, when voters saw same-sex marriage dominate ballots, according to the National Conference of State Legislatures.

Among its nine initiatives, California offered a proposition that could reduce government gridlock by lowering the minimum needed for the legislature to approve a state budget, making it a simple majority instead of a two-thirds majority. Only two other states require two-thirds.

Among other controversial or interesting measures:

Under Rhode Island Question 1, voters were projected by CNN to reject changing the official state name from "State of Rhode Island and Providence Plantations" to simply "Rhode Island."

In the wake of scandal in the governor's office, Illinois voters approved a constitutional amendment (HJRCA 31) that will allow for a recall of a governor and a special election to choose a replacement -- a process that exists in 18 other states. For the measure to pass, the "yes" votes must total at least 60 percent of those voting on this question or a majority of those voting in the overall election.

Arizona voters were projected by CNN to approve Proposition 107, which called for an affirmative action/discrimination ban. The amendment to the state constitution would prohibit the state from granting preferential treatment or discriminating against any individual or group on the basis of race, sex, skin color, ethnicity or national origin.