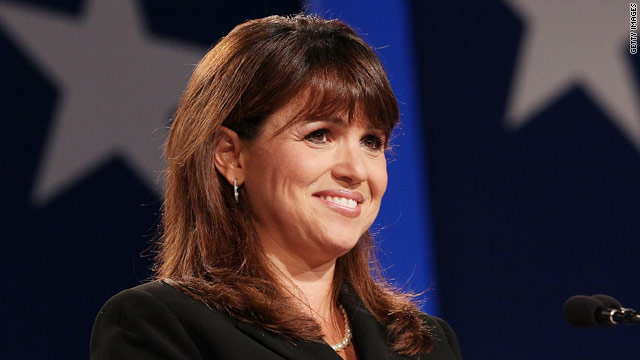 Republican Christine O'Donnell has found herself playing defense for much of her Delaware Senate campaign.
STORY HIGHLIGHTS

Washington (CNN) -- In the days leading up to what looked like an upset win in Delaware's Republican Senate primary, Christine O'Donnell found out the perils of being in the national political spotlight.

"I've put my name on the line," O'Donnell said at a recent candidates forum in Delaware. "And I've taken a lot of hits ... a lot of character assassination."

The Tea Party-backed candidate has been repeatedly mocked by pundits for not only her lack of experience but for her past.

In a 1999 interview on comedian Bill Maher's TV show "Politically Incorrect," she stated she used to "dabble into witchcraft."

The comments forced the 41-year-old to go into defensive mode, addressing that issue rather than focus on her opponent, Democrat Chris Coons, executive of New Castle County.

Her first major TV ad focused not on issues or her opponent but on that 1999 statement, in which she declares, "I am not a witch. I'm not anything you've heard. ... I'm you."

The Coons campaign also took a shot at the ad by putting an image of her from the ad on his website with the message "Tell Christine O'Donnell: You are not me."

O'Donnell takes all the witch comments in stride, telling CNN in a rare interview with a national news outlet that she is isn't necessarily embarrassed.

"And I'm not saying that I'm proud. You know, obviously what they're trying to do is paint a picture of who I was 20 years ago. I've matured in my faith. I've matured in my policies. Today you have a 40-something woman running for office. Not a 20-year-old. So that's a big difference."

O'Donnell, who beat moderate Republican Mike Castle in the September primary, also took the opportunity in the interview to highlight her outsider message.

"We won the primary. We challenged the political system as we know it. We busted up the backroom deals, and we made a lot of people afraid."

But she still faces several controversies that have forced her campaign off message:

-- O'Donnell's former campaign manager has accused her of paying rent with campaign donations, an allegation she argues has "no truth to it."

-- She's been attacked by Democrats and even Republicans, including Karl Rove, on her qualifications to serve as a senator, among other things.

O'Donnell is no stranger to the world of politics and its downfalls.

She has run for the Senate three times in five years. She finished third in the 2006 GOP primary before running uncontested in 2008 against then-Sen. Joe Biden. She lost by 30 percentage points.

O'Donnell again this year finds herself in a tough position, at least according to the polls.

The poll, which surveyed 790 likely voters from October 8 to 11, has a margin of error of plus or minus 3.5 percentage points.

"What looked like a probable Senate pick-up for Republicans has quickly slipped from their grasp. In fact, with Mike Castle off the ballot for the first time in years, Delaware may provide one of the only opportunities for Democrats to flip a House seat this year," Patrick Murray, director of the Monmouth University Polling Institute, said.

Other polling shows a similar narrative.

Despite all her perceived pitfalls, at least one prominent Delaware Democrat has warned she shouldn't be underestimated.

"It's not about what you see on the national television shows," Biden said, seemingly referring to some of those comments. "It's about where they [Coons and O'Donnell] stand on the issues."

And for her part, O'Donnell realizes something former House Speaker Tip O'Neill once said: "All politics is local."

"I'm concerned about what's important to the people of Delaware," she told CNN. "I want to go to Washington and do what average Delawareans would do."