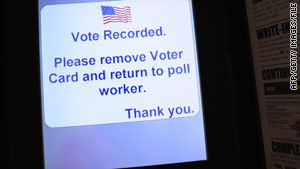 (CNN) -- I grew up in a Chicago suburb in Cook County, Illinois, where one assumed ballot box shenanigans. After all, this is where the phrase "vote early and vote often" was coined, where votes allegedly were cast from beyond the grave. So I come to researching voting issues with a perspective jaundiced since childhood.

Since the 2000 presidential election, which introduced the term "hanging chad" to public discourse, scrutiny and skepticism about how our elections are conducted also has increased.

Almost all of us go to polling places that use some type of electronic voting machine. Mine uses touch screens. If you're not sure what your state uses, check out this review from VerifiedVoting.Org.

We assume that our votes are recorded accurately and added to the final count. They are, aren't they?

This space is too limited to list all of the complaints about all of the various kinds of machines, the most serious ranging from votes not counted to votes switched to other candidates.

One of the squeakiest wheels on the subject of voting is Brad Friedman, of "The Brad Blog," who is not impressed with the security of high-tech voting machines. "Use of any touch-screen voting machine is the equivalent of a 100% faith-based election. No votes cast during an election -- none -- can be verified as having been accurately recorded on such systems. Ever."

Needless to say, the companies that manufacture voting machines have more faith in their product than Friedman and other critics, seeing them as secure, more capable of accurately recording a voter's intentions, and more accessible to the disabled and those who don't speak English.

ProCon.org reviewed the pros and cons when it comes to electronic voting machines.

But what does Pac-Man have to do with voting machines? Professors J. Alex Halderman from the University of Michigan and Ari Feldman from Princeton University got hold of a supposedly tamper-proof machine, with its tamper-proof seals still intact. And this is what they did.

Did watching that make you nervous? A year ago, incidentally, Halderman was part of another multi-university team that -- again, to make a point about security -- "forced" a voting machine to "turn against itself and steal votes."

There are increasing calls for Congress to authorize creation of a federal database so that machines that have problems in one election don't have the same issue in the next.

"Voting systems fail in a particular county in one election, and then again later, under similar circumstances, but in a different locale. These repeated failures disenfranchise voters and damage public confidence in the electoral system," wrote Lawrence Norden, senior counsel in the Democracy Project at the Brennan Center for Justice at New York University's School of Law.

A relatively small number of companies own the electronic voting systems, and the U.S. government moved earlier this year to prevent too large a concentration in the hands of one company.

New York voters have their own, freshly formed opinions, as the state's switch from old-fashioned mechanical lever machines to electronic devices using paper ballots fed into optical scanners did not go off without a hitch.

New York, incidentally, is the last state in the union to "modernize" its voting system under federal law.

One problem still being addressed is ensuring that the votes of an estimated 6 million military personnel and other overseas voters are not overlooked. An estimated 17,000 such ballots were not counted in 2008, often when the ballots returned late after being mailed out late to the troops. The Military and Overseas Voter Empowerment Act, enacted last year, aims for a 45-day turnaround to correct this problem.

That would have meant mailing out ballots by September 18. But nine states, along with the District of Columbia and the Virgin Islands, have received waivers from that provision, most saying that with primary elections in August and September, they could not get general election ballots prepared and mailed out in time.

Houston really does have a problem, a big one, after an August 27 warehouse fire destroyed almost all of the 10,000 electronic voting machines to be used by an estimated 1.9 million voters in Harris County, who make up 15 percent or more of the Texas electorate. County officials are trucking in replacement equipment from other jurisdictions, just weeks before Election Day.

In my reading, I've also come across ideas about changing the way America votes.

William Galston, a scholar at the Brookings Institution in Washington, suggested that states experiment with making voting compulsory "to move politicians away from the red-meat politics of appealing only to their bases, which now dominate elections, and toward a more moderate and consensual politics."

Walter Williams, the John M. Olin distinguished professor of economics at George Mason University, proposed that those who pay more should get to cast more ballots. "What I'm suggesting is that every American gets one vote in every federal election, plus another vote for each $20,000 he pays in federal taxes. With such a system, there'd be a modicum of linkage between one's financial stake in our country and his decision-making right. Of course, unequal voting power could be reduced by legislating lower taxes."

West Virginia experimented with online voting for military and overseas voters during its primary in May, using five counties as a test. The secretary of state's office reported that 80 percent of those who asked for online credentials wound up casting ballots, compared with 40 percent for those who asked for and mailed ballots from overseas and 25 percent for those using e-mail or fax.

"Even though there weren't a lot of participants, military/overseas voting is historically a small turnout and is very difficult with mailing prohibitions and deadlines. This procedure was a huge improvement from the traditional absentee procedure," said Jan Pest, Marshall County clerk.

On the other hand, there's Lyndeborough, New Hampshire, population roughly 1,600, where earlier this year residents voted to prohibit computerized vote counting and continue the town's tradition of hand-counting paper ballots, as is done in more than 140 towns in the Granite State.

"I know that the town of Lyndeborough loves its elections and is very community-oriented. I thought it would be good to be proactive and protect this piece of democracy we have in New Hampshire," said resident Nancy Tobi, who put forward a petition on the question.

There are numerous other issues I've not mentioned. Here is an outlook of the top 10 voting issues from the Moritz School of Law at The Ohio State University, and here's the top 10 from ElectionlineWeekly at the Pew Center for the States.

Back to that admonition to vote early (just not often). This is a trend worth noting. In the 2008 presidential election, fully 30 percent of ballots were cast before Election Day, up from 20 percent in 2004 and compared with just 7 percent in 1992.

That's American democracy at work. But, please, if you don't vote, don't complain.