Official defends Obama ahead of revelations in Woodward book 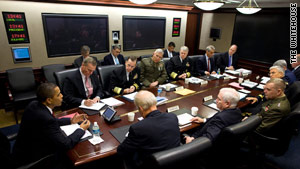 Bob Woodward takes your questions and talks about his new book on "Larry King Live" Wednesday, September 29, at 9 p.m. ET on CNN.

Washington (CNN) -- A senior administration official defended President Barack Obama on Wednesday as a decisive commander in chief ahead of next week's release of a book that reveals an administration deeply divided over U.S. strategy in Afghanistan.

"Obama's Wars," by veteran Washington journalist Bob Woodward, describes a frustrated president who urgently sought an exit plan, only to be provided with options that involved increased U.S. troop levels, the Washington Post reported Wednesday. Woodward is associate editor of the newspaper.

Woodward takes readers behind the scenes in the Obama White House through accounts of closed-door strategy sessions, private conversations, internal memos and hours of interviews with key players.

"This needs to be a plan about how we're going to hand it off and get out of Afghanistan," Obama is quoted as telling his aides as he agreed to a short-term escalation of 30,000 troops, according to the Post.

"Everything we're doing has to be focused on how we're going to get to the point where we can reduce our footprint. It's in our national security interest," Obama said, according to the newspaper.

In an October meeting with Secretary of Defense Robert Gates and Secretary of State Hillary Clinton, Obama said: "I'm not doing 10 years. I'm not doing long-term nation-building. I am not spending a trillion dollars."

A senior administration official on Wednesday downplayed the rifts portrayed in the book, slated for release Monday.

"The president comes across in the review and throughout the decision-making process as a commander in chief who is analytical, strategic and decisive, with a broad view of history, national security and his role," the official told CNN Senior White House Correspondent Ed Henry.

Woodward writes that dissent turned into name-calling on both sides, the Post reported. At one point, Petraeus felt shut out and told an aide that he considered Obama adviser David Axelrod a "complete spin doctor."

Another key disclosure in Woodward's book is that the CIA is running a 3,000-strong Afghan paramilitary force.

A CIA spokesman would not comment on the paramilitary force. Pakistani officials denied that CIA-trained soldiers were operating on Pakistani soil.

Among other revelations in Woodward's book, according to the Post:

-- The U.S. government was unprepared to deal with a nuclear terrorist attack on American soil. Obama told Woodward in an interview: "When I go down the list of things I have to worry about all the time, that is at the top, because that's one where you can't afford any mistakes."

A spokesman for Karzai dismissed the allegations.