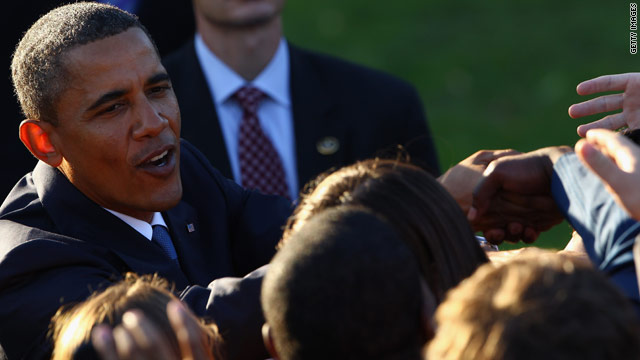 (CNN) -- President Barack Obama Tuesday delivered his second back-to-school message to the nation's students -- an event marked by far less controversy than the first time around.

The speech -- delivered to a thunderous round of applause from students at Julia R. Masterman Laboratory and Demonstration School in Philadelphia, Pennsylvania -- encouraged students to make the most of their educational opportunities.

"Nobody gets to write your destiny but you," Obama said.

The president said education "never has been more important."

"I'm sure there are going to be times in the months ahead when you're staying up late doing your homework or cramming for a test, or you're dragging yourself out of bed on a rainy morning and you're thinking, oh boy, I wish maybe it was a snow day," he said. "Let me tell you, what you're doing is worth it. ... Nothing is going to have as great an impact on your success in life as your education."

Last year, his first as president, Obama's plan to deliver a similar message prompted an unexpected backlash from conservatives who worried he would push students to support his political agenda. However, the speech Obama delivered at a Virginia school included no political references and was welcomed by conservatives.

This year's speech also focused on urging students to work hard in order to achieve their goals.

He called on students to meet their responsibilities for school by showing up on time, paying attention in class, doing their homework, studying for exams and staying out of trouble.

"I wasn't always the best student when I was younger. I made my share of mistakes," Obama said, going on to describe a scolding from his mother about the need for more effort.

"It was pretty jolting, hearing my mother say that," the president said. "But eventually, her words had their intended effect, because I got serious about my studies. I started to make an effort in everything I did. And I began to see my grades -- and my prospects -- improve. And I know that if hard work could make the difference for me, then it can make a difference for all of you."

He also urged students to take on new challenges, with specific encouragement to rebound from disappointment and failure to try again.

"So, what I want to say to every kid ... [is] that life is precious, and part of what makes it so wonderful is its diversity," the president said.

Obama also announced a second "commencement challenge," where a high school making positive changes and advancements is selected by the White House to have the president deliver its graduation speech. Obama addressed graduates from a high school in Kalamazoo, Michigan, in 2009.

Some of the controversy surrounding the president's education address last year involved a proposed lesson plan created by the Education Department to accompany the speech. An initial version of the plan recommended that students draft letters to themselves discussing "what they can do to help the president."

After the criticism from conservatives, the White House distributed a revised version encouraging students to write letters about how they can "achieve their short-term and long-term education goals."