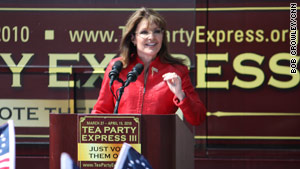 (CNN) -- Christine O'Donnell's upset win over Rep. Mike Castle in the Delaware Republican Senate primary is also another major victory for the Tea Party Express and for Sarah Palin.

The Tea Party Express, a leading Tea Party organization, endorsed O'Donnell on July 21 and spent more than $250,000 to help the once long shot candidate defeat Castle, a brand name in Delaware thanks to two terms as governor and the past 18 years as the statewide congressman.

O'Donnell's victory comes two weeks after Sen. Lisa Murkowski conceded to Joe Miller in Alaska's GOP Senate primary. The Tea Party Express pumped in about $600,000 to help the once unknown Miller edge out Murkowski, part of a political dynasty in Alaska.

Tea Party Express is one of the most recognized national Tea Party organizations, thanks to its three high-profile bus caravans and rallies. The group, based in Sacramento, California, has also become a major player in Republican Party politics, spending hundreds of thousands of dollars on ads for Republican Senate candidate Scott Brown in Massachusetts, who in January upset Democrat Martha Coakley in a special election to fill the late Sen. Ted Kennedy's seat.

More recently, the organization helped the little-known Sharron Angle win the Republican primary in Nevada, endorsing her and spending about a half-million dollars on ads. Angle now faces off in the general election against Senate Majority Leader Harry Reid, the top Democrat in the chamber.

Tea Party Express, along with other Tea Party groups and other conservative organizations, also targeted incumbent Republican Sen. Bob Bennett in Utah for his vote on the Troubled Assets Relief Program and helped defeat his bid for a fourth term. Tea Party Express then backed underdog Mike Lee's successful primary campaign in Utah and Lee now is heavily favored to win the general election in November and join the Senate next year.

The group also endorsed Rand Paul in Kentucky. The son of former GOP presidential hopeful and Texas Rep. Ron Paul topped Kentucky Secretary of State Trey Grayson, the establishment Republican candidate, in the state's Senate primary. They also endorsed Marco Rubio in Florida. The former Florida House speaker, once a long shot to win the Republican Senate nomination, is now the party's nominee. The onetime front-runner, Gov. Charlie Crist, dropped his bid for the GOP nomination and is running for the Senate as an independent candidate.

So what's the secret to the Tea Party Express' success?

"They have cut right to the chase. They have a very uncomplicated message that resonates with voters who think Washington's problems are quite simple and quite obvious: We're spending too much money, government is too big and we can't trust career politicians to fix these problems. And voters are indicating they would much rather try something or someone new instead of sticking with the status quo or the safe pick," said Republican strategist Kevin Madden.

O'Donnell's victory is also a big win for Palin.

"Thank you Gov. Palin for your endorsement," said O'Donnell. "She got behind us war-weary folks and gave us a boost of encouragement when we needed it."

On September 9, the former Alaska governor and the 2008 Republican vice presidential nominee endorsed O'Donnell. One day before the primary, a recording of Palin urging Delaware Republicans to vote for O'Donnell was blasted to voters by robo-calls across the state.

She also endorsed Arizona Sen. John McCain, the former presidential candidate who rocketed Palin to stardom in 2008 when he selected her as his running mate. Though members of the Tea Party movement lined up against the longtime Arizona senator, Palin stayed loyal to McCain and appeared at a campaign event with him in March. Addressing long-standing concern among conservatives McCain is too centrist, Palin said the Arizona senator is driven by "common-sense conservative principles" and touted his steadfast opposition to the Obama administration.

In the race for Florida attorney general, Palin backed Pam Bondi, a Tampa prosecutor who faced the better-known Lt. Gov. Jeff Kottkamp for the job. Palin's endorsement of Bondi came about a week before the vote and even surprised Bondi, who had no notice Palin would take to her Facebook page to back the campaign. Bondi came out on top in a three-candidate field.

Palin campaigned in person with former Georgia Secretary of State Karen Handel, who lost a runoff to former Rep. Nathan Deal for the state's Republican nomination for governor.

Palin also endorsed Tea Party Express-backed Tiahrt, who was defeated in the battle for the Senate nomination in Kansas.

Earlier in the primary season, Palin successfully backed statewide candidates such as Nikki Haley in South Carolina, Terry Branstad in Iowa and Susana Martinez in New Mexico, who all won gubernatorial nominations, and Fiorina in California and Paul in Kentucky, who captured Senate nominations.