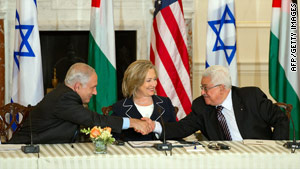 Hillary Clinton, shown with Benjamin Netanyahu, left, and Mahmoud Abbas in Washington this month, will be in the Mideast this week.
STORY HIGHLIGHTS
RELATED TOPICS

(CNN) -- Listen to Secretary of State Hillary Clinton talk about the Mideast peace talks during Bill Clinton's presidency, and you get the impression she feels the chance to secure a two-state solution eluded her as much as it did her husband.

"Both my husband and I were very sad that we missed that opportunity," Clinton told a Palestinian journalist and an Israeli reporter this month. "... Then-[Israeli] Prime Minister Barak and then-[Palestinian Authority] President Arafat were so close."

Clinton and U.S. special envoy George Mitchell will be in Egypt on Tuesday and Jerusalem on Wednesday to participate in talks between Israeli and Palestinian leaders.

The negotiations are part of a process -- kicked off earlier this month by a meeting between Israeli Prime Minister Benjamin Netanyahu and Palestinian leader Mahmoud Abbas that Clinton hosted in Washington -- aimed at closing a peace deal within the next 12 months.

Israelis and Palestinians will be familiar with her involvement dating back to her years as first lady, when she would meet with leaders in the region, including Netanyahu -- then serving his first term as prime minister -- and Arafat. She was "another pair of eyes" for the United States on the situation at that time, not directly negotiating but supporting the administration and the president's policies on the Israeli-Palestinian conflict, Walker said.

She was criticized by some Israelis in 1999 when, during a visit to the West Bank, Clinton sat through and didn't immediately react to an anti-Israeli speech given by Arafat's wife, Suha Arafat. That was a valuable learning experience for the future secretary of state, Walker said.

"She was able to manage that and handle it, but was also aware from then on that you had to be careful when dealing with" partisans on either side of the conflict, Walker said.

The two-week Camp David summit in 2000 ended with no deal. The second Palestinian intifada, or uprising, began soon afterward; and subsequent talks have failed to secure a solution.

"My husband, I, and others worked very hard with Yasser Arafat and [former Israeli Prime Ministers] Yitzhak Rabin and Ehud Barak and others to try to get to the point where we could establish [a final deal], and of course I wish we had done that," Clinton told the Israeli and Palestinian journalists earlier this month in Washington.

Any solution would be up to the Israelis and Palestinians, but can Clinton help make a difference in a conflict that has scuttled so many previous peace attempts?

Aaron David Miller, who advised six U.S. secretaries of state and once helped formulate U.S. policy on the Arab-Israeli peace process, said Hillary Clinton arguably has at least some of the qualities that America's top diplomat would need to help shepherd successful Israeli-Palestinian negotiations.

First, she has a persona, or a star quality: "You need to fill a room up," Miller said. "You need to have the interlocutors not comfortably seated, but perched nervously from their chairs, wondering what they'll ask you to do."

He said she'll also need the president's support, which it appears she has, and an ability to be tough and devious.

"By devious, I don't mean constructing lies, but getting people to do things they don't want to do," Miller said. "I think in toughness and instrumentality, there's no question she has that."

The unknown, Miller said, is whether Clinton has a negotiator's mind-set, "to look at life as a chessboard and figure out what the next move is and the next move after that."

And regardless of whether she has all these things, "it will be irrelevant if the Arabs and the Israelis don't buy into negotiations," Miller said. "First, you have to determine whether the parties are serious, and if they are, then she has a chance."

Abbas has threatened to abandon final status talks if Israel allows a moratorium on building Israeli settlements in the disputed West Bank to expire September 26. Another roadblock is the Palestinian view that any two-state solution must include a handover of all the land Israel captured in the 1967 war; that includes East Jerusalem.

Walker also noted the Palestinian community is split -- with Hamas controlling Gaza and Abbas' Fatah party in charge of the West Bank.

But Mitchell, when asked earlier this month what might be done differently, noted that President Obama made Mideast peace a "high priority immediately upon taking office," whereas others waited and ran out of time.

And Walker said the Obama administration engaged other Arab leaders early, "which we didn't do in the run-up to the [Camp David] summit." On issues such as the status of Jerusalem and refugees, where "other countries and external populations are involved, [Palestinians] need support from others," he said.

As for Clinton's influence, when asked about the differences between her diplomatic style and that of her husband, Miller answered: "She's a lot tougher than he was."

"I worked for him, and I have the greatest respect for him. He tried to take on something very hard, but couldn't do it, probably because the Arabs and Israelis weren't ready," Miller said. "They love him, but the reality was you don't want them to love him. You want them to fear him."

"I think the people in the region appreciate that she does her homework. They take her seriously, and I think she commands respect," he said.