600: The perils of a presidential pen pal 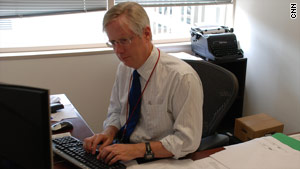 CNN's Tom Foreman says he may never stop writing to the president, whoever the president may be.
STORY HIGHLIGHTS
RELATED TOPICS

(CNN) -- Not long before he took office, President Barack Obama said something I am sure he now regrets. "There are a lot of people who seem to think they know how to run this country. I hope they'll let me hear from them." At least I think I remember him saying something like that. Anyway, it was a huge mistake, because I have now written 600 letters to the White House. One every day since he was inaugurated. It started as a joke. I thought the idea of sending armchair advice to the Leader of the Free World was funny and my first letter was really little more than congratulations.

But after I posted letters on the "AC360" blog for 10 days, a lot of readers liked them, so I extended the string to the first month. Then the first 100 days. Then 200. And now, I have written enough to fill two books. And yes, I am aware that this can look like either dedication or mental illness, depending on your point of view.

Most of the letters are funny, or at least they make me laugh. Like the one I wrote about his fancy new presidential limo.

But plenty are serious, too. I've written about swine flu, Haiti, the Middle East, the wars and of course the economy. I've taken the president to task now and then; for example, when he wrote to the big guy in North Korea instead of me, his dedicated pen pal.

I've written about my own personal struggles and triumphs, such as being trapped in Indianapolis, Indiana, by a blizzard while my beloved Saints played the Colts in the Super Bowl.

Sometimes I depart from my regular fare to share events in my life that have shaped my views, like a long story about when I first encountered racism as a child.

When I discovered racism

Grinding out so many full-length letters has not always been easy, especially in our increasingly shorthand, e-mailing, texting world; OMG LOL. After all, I do have a day job. Many nights, long after the Washington newsmakers are asleep and my family is, too, I sit in the darkness of our living room typing away while the dog snoozes at my feet. Happens on the road in hotels, too. I mean, without the dog, of course.

I considered actually mailing the letters at the start, but decided that if I had to keep up with stamps, envelopes and figuring out how to print on the road I'd give up. Plus, he's a very hi-tech president, so online posting seems adequate. Although who knows? Despite regular invitations for him to call, write back or come by to play air hockey, he's never responded.

But plenty of readers have. Some have been complimentary, like C.A. Mortenson. "You know every time I get my mind set on something you guys come along and make me re-think things. Thanks." Or Mary MacElveen "Your letter is by far one of THE most thought-provoking and powerful letters I have read in a long time." Or Moneca, "Amen, Mr. Foreman. Amen." It always makes me vaguely uncomfortable when someone calls me Mr. Foreman, btw. I prefer just Tom.

At least, I prefer Tom to what some obviously want to call me. Like Mariah from Texas. "Are you crazy?" Or Helen when she finally found something she agreed with, presumably after a lot of reading. "CNN should find a better job for you. That is the first letter you wrote that makes sense." That made me laugh, because I've felt that way about other writers sometimes.

Many readers have urged me to keep on, and others have begged me to stop. I appreciate them all. I have probably been most touched by people who simply express a heartfelt connection over the miles, like when I wrote about Michael Jackson's death and Windy responded, "Thank you for such a nice letter, I feel the same way." And I'm flattered when someone reposts a favorite, such as the letter I wrote about rebuilding New Orleans.

Where is the safe house?

I made a few simple rules for myself. First, I don't pick sides. I can offer analysis, ideas and general observations, but not conclusions beyond the common sense kind. Second, I try to be encouraging. Third, I respect the presidency. Although I write in a familiar tone, I never refer to President Obama (nor would I refer to any president) as "my friend," or "pal."

"How long are you going to do this?"

That's the question so many people ask, and the honest answer is, "I don't know." Every time I reach a milestone like this one, I think I should call it quits. But I enjoy the process, heaven knows I need the practice writing and I don't want to disappoint the people who now count on these letters every day, including my mother. So on it goes. I have considered doing it for the rest of my life. I know it's not exactly the Lewis and Clark journals, but such letters, written concurrently with the events of our world, are an unusual historic record if nothing else.

I will almost certainly continue through the next presidential election in 2012. And I'd hate to abandon the current president during the critical changeover from first term to second should he win, and if the White House passes into other hands ... well, why should the next president get a break?