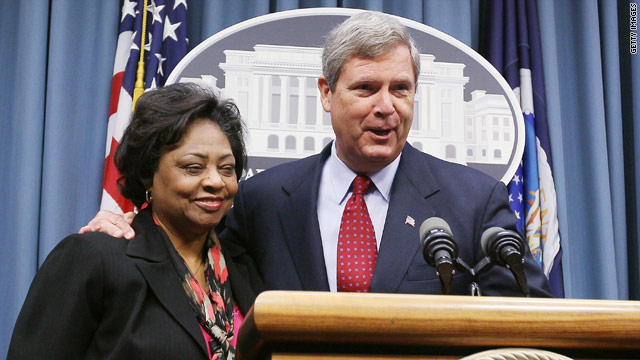 Sherrod: Why I said no
STORY HIGHLIGHTS

Washington (CNN) -- Shirley Sherrod, who received an apology after being forced to resign from the Agriculture Department in July, declined an offer Tuesday to serve as the agency's deputy director of the Office of Advocacy and Outreach.

The newly created position was designed to improve the department's civil rights efforts and image nationwide.

In an interview with Tony Harris on "CNN NewsRoom" Tuesday, Sherrod said she was uncertain about that role. "There are still many questions around that position," she said. "I just felt that taking the position at this time wouldn't exactly be where I should be at this point. ... Everything that should've happened with that position hadn't been made clear."

Sherrod said she also turned down an offer to return to her previous position as the department's director of rural development for Georgia. "When you look at everything that has happened in the last four or five weeks, it makes it difficult to go back to that position. I feel at this time I could do more to address issues not as a full-time employee of USDA," she told Harris.

Sherrod met Tuesday morning with Agriculture Secretary Tom Vilsack to discuss the offers. It was the first face-to-face meeting between the two since a controversial sequence of events last month culminated in Sherrod stepping down.

The two indicated that, while Sherrod will not return to the USDA as an official staffer, she is likely to serve in an unofficial advisory capacity to help address issues related to racism at the department.

In a joint news conference after their meeting, Vilsack noted that Sherrod had expressed strong interest in a final settlement of claims made by black farmers against the USDA, as well as lawsuits raised by women, Hispanics and Native Americans.

She said Vilsack pushed "really, really hard" for her to stay in the department during their roughly 90-minute meeting, but she just didn't "think at this point with all that has happened" that it would be possible to continue working there.

She needs to "take a break" from the furor surrounding her dismissal, she said.

But "it doesn't mean I'm not interested in that work, because I am," Sherrod told reporters at the Agriculture Department.

Sherrod said she enjoyed her work with the department and "would want to see (it) continue."

"We need to work on issues (of) discrimination and racism in this country, and I'd certainly like to play my role," Sherrod said.

She later told CNN's Harris: "I'm encouraged there are people who want to seriously talk about the racism that exists in this country. I'd like to see how we can deal with it and move forward. If I can help promote that discussion, it's something I would really like to do. I'd like to see us once and for all deal with it.

"It's a great country. Let's make it better. Let's all get along."

She praised "new processes in place" to prevent discrimination and inappropriate firings at the department, but said she doesn't "want to be the one to test it."

Sherrod was forced to resign from her position in Georgia in July after misleading and incomplete video footage of a speech she gave was posted on the internet and picked up in media reports. Vilsack apologized to her and offered her the promotion.

He repeated his previous assertions Tuesday that he did not speak with anyone at the White House before initially deciding to force Sherrod to step down.

"This was my responsibility," he said. "I disappointed the president (and) the country. ... I have to live with that."

The secretary has apologized "and I accept that," Sherrod replied.

However, the incident took place decades before she joined the department, and her speech in its unedited form made the point that people should move beyond race. In addition, the white farmer whom Sherrod mentioned has told reporters that she helped him save his farm.

"People were quick to judge," Sherrod told Harris. "Hopefully it won't happen again with others in the future. I'm hoping with all I went through and continue to deal with, at least in the future people will think first and give the opportunity to look before quickly and hastily making a decision."