Shirley Sherrod to meet with USDA secretary about job offer 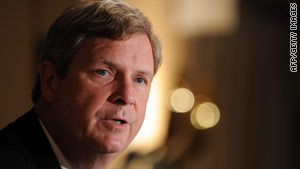 (CNN) -- Shirley Sherrod, who received an apology after being forced to resign from the Agriculture Department, will meet Tuesday with Agriculture Secretary Tom Vilsack to discuss a job offer, a department official confirmed Saturday.

It will be the first face-to-face meeting between the two since a controversial sequence of events last month culminated in her stepping down.

Sherrod, who was the Agriculture Department's Georgia Director of Rural Development, has said she is being offered the position of deputy director of the Office of Advocacy and Outreach.

The department official who confirmed the meeting asked not to be identified.

Sherrod was forced to resign in July after misleading and incomplete video footage of a speech she gave was posted on the internet and picked up in media reports. Vilsack apologized to her and offered her the promotion.

Sherrod spoke about the incident Saturday at a meeting of the Federation of Southern Cooperatives Land Assistance Fund in Epes, Alabama.

She said her work with other agencies to help poor counties in south Georgia was overlooked during the controversy.

Sherrod said Saturday she has no criticism of President Obama and believes the NAACP, which also urged her to resign before learning the video had misconstrued her comments, was tricked.

Repeated calls to Sherrod were not returned Saturday.