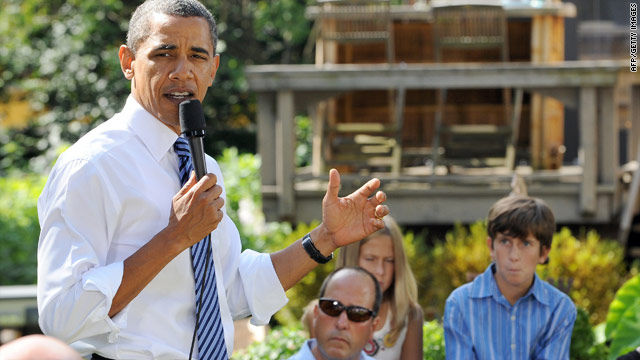 President Obama talks about the economy Wednesday with Ohio families at Rhonda and Joe Weithman's house in Columbus.
STORY HIGHLIGHTS

Columbus, Ohio (CNN) -- President Barack Obama pledged Wednesday that the Social Security system won't be privatized while he is in the White House.

In a town-hall style meeting with a few dozen residents of Columbus, Ohio, Obama said "modest" changes can keep the government pension system solvent for decades.

Republicans have called for transforming the government program to a private savings account as a way to help keep it going as America's aging population stresses its financial health.

"It will not be privatized as long as I'm president," Obama said to applause, noting that the economic recession and Wall Street collapse would have devastated the savings of retirees under a privatized Social Security system.

He said Social Security needed adjustments, rather than a total overhaul.

"There are some fairly modest changes that can be made without any newfangled schemes that can keep it running for 75 years so everybody gets what they deserve," Obama said.

While citing steps his administration has taken to spur recovery from the recession, Obama also warned that more work needed to be done. He said the housing market remains a "big drag" on the economy and will take more time to recover.

Overbuilding in the boom years that preceded the economic recession has resulted in too many houses available for the level of demand, the president said.

"It is going to take time to absorb this inventory that is just too high," Obama said. "There's no quick way to do it."

Before the meeting, Obama huddled around the kitchen table with the Columbus family of Rhonda and Joe Weithman to talk about how his administration's economic stimulus spending has helped it.

In addition, the administration subsidized COBRA health insurance benefits, which allowed Rhonda Weithman to maintain the family's insurance coverage after she lost her job, he said.

The trip was Obama's ninth to Ohio since taking office. Ohio will likely be a key state in upcoming elections.

On Tuesday, Obama held a round-table discussion with three Seattle, Washington, business owners -- an innkeeper, a baker and a pizza maker. The president cited how each has been helped by his administration's policies intended to spur recovery from the recession.

He also renewed his call for the U.S. Senate to pass a jobs bill aimed at helping small businesses. Senate Republicans have filibustered the measure, which would provide tax breaks for small businesses and expand available capital to them through local banks.

Obama insisted the Senate would take up the bill again immediately after returning from its August recess.

The measure would provide immediate help to small-business owners, who are the backbone of the U.S. economy, Obama said.

"They are who this bill is for," he said of the Seattle-area small-business owners who flanked him. "They will see the benefits right away."

The Small Business Jobs and Credit Act, stalled in the Senate, would authorize the creation of a $30 billion lending fund. The Treasury Department would run the program, which would deliver ultra-cheap capital to community banks, defined as those with less than $10 billion in total assets.

It would offer a slew of tax cuts for small businesses to encourage both investment and entrepreneurship. And the legislation would provide $1.5 billion in grants to state lending programs that can't turn to empty state coffers for more cash.