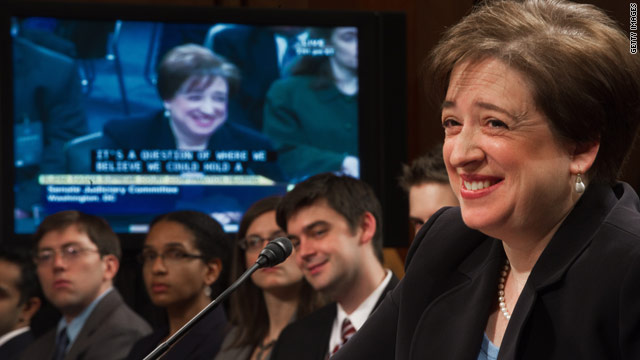 The full Senate is expected to vote on Elena Kagan's nomination before its August recess.
STORY HIGHLIGHTS

(CNN) -- A new poll reveals most Americans would like to see the Senate confirm Solicitor General Elena Kagan to serve on the Supreme Court, but Democrats are more likely to support her.

The CNN/Opinion Research Corporation poll asked 1,018 adults by telephone whether Kagan should be confirmed by the Senate. About 54 percent of the respondents said yes, and about 34 percent said no.

That gives Kagan virtually the same amount of support that the public gave the two most recent Supreme Court nominees -- Sonia Sotomayor and Samuel Alito -- just days before they were confirmed by the Senate.

Three-quarters of Democrats support Kagan's nomination; half of all Republicans oppose her. Independents tend to favor her nomination by a 48 percent to 40 percent margin.

After the Senate Judiciary Committee approved the nomination of Kagan last month, Obama said Kagan would be a "fair and impartial Supreme Court Justice who understands how decisions made by the Court affect the lives of everyday Americans."

Several Republicans have said Kagan, who was the law school dean, sought to treat the military as second-class by denying recruiters access to the campus Office of Career Services.

The full Senate is expected to vote on Kagan's nomination before departing for its August recess on Aug. 9. If approved, Kagan will fill the seat of retiring Justice John Paul Stevens and become the 112th person to join the high court.