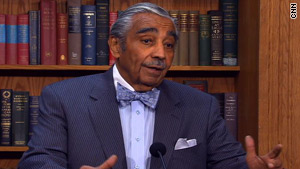 "I think Charlie Rangel served a very long time and served his constituents very well. But these allegations are very troubling," Obama said on Friday in an interview with CBS News' Harry Smith.

"He's somebody who's at the end of his career. Eighty years old. I'm sure that what he wants is to be able to end his career with dignity. And my hope is that it happens." Obama added.

Obama commented Friday just hours after a subcommittee of the House ethics committee recommended that the Harlem Democrat be reprimanded.

A reprimand would be a relatively light punishment, compared with censure and expulsion.

The recommendation was made to the ethics committee before Thursday's public hearing detailing charges against Rangel. The full committee and the House would have to approve any sanction against Rangel.

The full committee has accused Rangel of 13 violations of House rules involving alleged financial wrongdoing and harming the credibility of Congress.

Other charges involve alleged income tax and financial disclosure violations, as well as improper use of government mail service and letterhead. An ethics committee trial of Rangel is still set to be held, most likely in September, barring a settlement between Rangel and the committee members.