President Obama's handbook to 'The View' 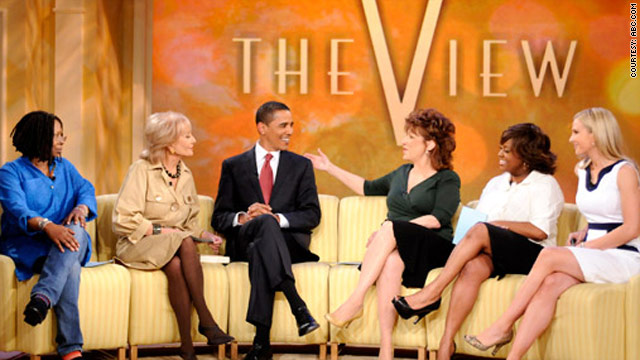 Washington (CNN) -- Three comedians, a journalist and a Republican walk into a television studio. Sounds like the beginning of a joke, but it is what President Obama faces when he joins the co-hosts of ABC's "The View" this week.

His appearance, taped Wednesday and set to air on Thursday, is unprecedented: No sitting president has ever visited a daytime television show, according to ABC.

So what kind of communications strategy should Obama -- or any other politician, for that matter -- use when going on the lighthearted and sometimes controversial program? He should make fun of himself, a political public relations expert said.

"The handbook on all these kinds of appearances is, the more self-deprecating you are, the better," said Peter Mirijanian, who helps politicians and others handle effective communications strategies. "That's the rule of thumb. Whether you go on David Letterman or Jay Leno or 'The View.'"

Mirijanian said that Obama should do quite well, given his smooth delivery and the fact he is comfortable in his own skin.

And he did just that, by most accounts, when he went on the show in 2008 when he was running for president, and in 2004 while promoting his book, "Dreams from My Father: A Story of Race and Inheritance."

So why go on the gabfest as opposed to a news show? Audience.

"It's clear why he's doing it," Mirijanian said. "They've probably done all kinds of polling on this, heading into the election. The demographic that watches 'The View' is the so-called swing voters and soccer moms. ... It's a fairly sympathetic audience."

White House press secretary Robert Gibbs told reporters this week that the president's appearance was a vehicle for him to speak to people "where they are."

"We made a decision to put the president on Jay Leno, David Letterman, 'The View,' because that's where -- people have busy lives and it's best to go where they are. And I think that's what the president will do."

It's also a chance for the president to reach an audience that isn't necessarily partisan, and to call for harmony rather than inside-the-Beltway bickering.

"His line is going to be that we really need to reach across the partisan divide, and that's really been his mantra since the election," Mirijanian added. "The audience of 'The View' tend to be somewhat progressive in their views but not really partisan. It's a perfect venue for him."

And that may be a welcome relief for the president, who has faced intense scrutiny recently from members of his own party and Republicans over his handling of the war in Afghanistan .

The platform may give the president an opportunity to reach those directly affected by his war policy -- military families.

"There are a lot of women who watch whose husbands and whose sons are overseas and in harm's way and serving," Mirijanian said. "It does give him an opportunity to clarify our position in Afghanistan."

But not everyone thinks the appearance is such a good idea.

Pennsylvania Gov. Ed Rendell, who appeared on MSNBC's "Morning Joe" on Tuesday, said "The View" focuses too much on tabloid stories and "may not be an appropriate forum for a sitting president of the United States."

"The View," Rendell conceded, will provide the president with an opportunity to go off the teleprompter -- something he said Obama should do more often.