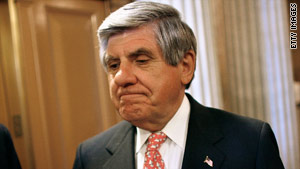 Washington (CNN) -- Democratic Sen. Ben Nelson is not afraid to buck his party when it comes to fiscal issues.

The Nebraskan did it again this week, voting against a bill extending unemployment insurance benefits to millions of Americans.

The bill passed Wednesday with the help of a couple of Repubican votes. It now goes to the House where it is expected to pass.

The extension, which lapsed in June, failed in an earlier Senate vote after a Republican filibuster. Nelson expressed concerns then over deficit reduction and how the extension would be paid for.

In this week's votes, Nelson insisted that Democrats find a way to pay for the extension of benefits. He said there are some stimulus funds that could be used -- an idea that Republicans back.

"I'm comfortable with my own decision on this," he said. "I made it clear what I think needs to be done." Nelson told CNN.

"The question is the level of emergency versus the initial point: I'm not trying to say it's [unemployment] not important. Obviously it's very important. If it's that important, it's important enough to be paid for."

His vote against his party's bill is a tell-tale sign that he follows his constituents -- and his principles -- over party, an expert said.

"Typically, we think of parties as 'teams' that help like-minded members achieve their goals," said Dana Griffin, a professor of political science at the University of Nebraska-Lincoln. "But as with any team, the players are never identical."

Griffin, who specializes in politicians' decision-making tendencies, added that because they come from different states with different concerns, interests, and needs, senators are constantly trying to balance their state's desires with national interests.

Nebraska is a traditionally Republican state made up of conservative voters.

"Amidst these competing interests, parties can help smooth the way," she said. "But while party is a helpful guide for predicting how members will vote, it's not a guarantee."

Griffin noted that members of Congress are constantly mindful of how their actions and votes will affect their electoral future, especially in today's political environment.

Others, however, say Nelson's focus on his state alone is hurting the greater national economy -- and his party's fight to maintain control of both legislative bodies in the midterm election.

"So there's an argument to be made that he's doing his job just fine [by standing on principles]," Ezra Klein, a Washington Post writer and blogger, said in a recent post. "But he's making his colleagues' jobs much harder."

Klein, a liberal, said that Nelson's decision resulted in millions of people losing their unemployment checks, and when that happens, "they blame their senators, even if it's not their senators' fault."

Another possible reason for holding back his support for an extension of benefits? The state's low unemployment rate.

New state figures for June found that the state's unemployment rate dropped to 4.8 percent from 4.9 percent in May, compared to the national average of 9.5 percent.

But it's not just deficit reduction and stimulus plans where Nelson finds himself at odds with Democrats.

Last week, Nelson said he he would not vote to debate a climate change bill sponsored by Democrats, which includes cap-and-trade provisions on carbon emissions. That provision, among others, is something Nelson has railed against in the past.

A Democratic leadership aide said Tuesday that Senate Majority Leader Harry Reid will not unveil details of the Democrats' energy bill at a caucus meeting. This was anticipated because Reid had announced he wants to take the bill up next week. It is more evidence that it is highly unlikely an energy bill will be acted on by the Senate before the recess.

And when it came to the recent Wall Street reform bill recently passed, Nelson had initial concerns with his party's bill -- but ended up voting for it. He had previously voted against an earlier Democratic plan.

During the health care reform debate, Nelson and other Democrats spoke out against the costs of plans being discussed in the House. He was also a staunch critic of the government sponsored public health option banded about by liberal members.

The public option was not included in the final health care bill signed into law -- and Nelson voted for it.

In 2009, Nelson aired concerns over President Obama's economic stimulus package, noting that there was a substantial amount of money that didn't belong in the bill.

In a floor statement on February 13, Nelson said the bill -- which he voted for -- was a "vast improvement over the first proposal considered several weeks ago."

"In the Senate, we faced a reality that any economic recovery plan would require at least 60 votes to overrule a filibuster attempt and win passage," he said. "So, I and a number of colleagues came together to work across the political aisle with a shared goal: scrub as much pork, non-stimulative spending and fat as possible from the bill to focus it sharply on saving and creating millions of jobs."

But Nelson, who was elected to the Senate in 2000, touts himself as truly bipartisan -- and he has a record of working across the aisle.

In 2005, he was a member of the bipartisan group of senators known as "The Gang of 14" that together broke a long stall in the Senate over judicial nominations.

Then in 2008, he became a part of "The Gang of 10" -- a bipartisan group that reached an agreement to breaking a deadlock in the Senate over energy legislation.

CNN's Ted Barrett and Brianna Keilar contributed to this story.