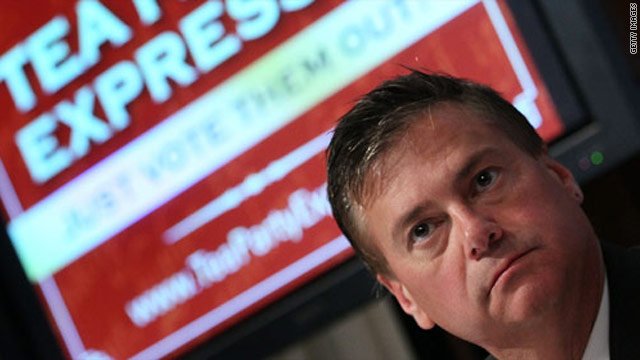 (CNN) -- Tea Party activist Mark Williams says he's done discussing the controversy stirred up by his attack on the NAACP, accusing a fellow movement leader of turning the debate into "a World Wrestling style personality conflict."

The National Tea Party Federation, an organization that seeks to represent the Tea Party political movement around the country, has expelled Williams and his Tea Party Express organization because of the inflammatory blog post Williams wrote last week, federation spokesman David Webb said Sunday. In response, Williams announced in another statement on his blog that, "I am refusing all media requests on this" and canceled a scheduled interview on CNN to discuss the controversy Sunday evening, citing a last-minute change in travel plans.

"That careless individual tea partier who assumed the mantel of 'leadership' did so long enough to turn a critical and serious movement and delicate peace with skeptical groups into a World Wrestling style personality conflict with me at the center," Williams said. "There are internal political dramas amongst the various self-anointed tea party 'leaders,' and some of the minor players on the fringes see the Tea Party Express and Mark Williams as tickets to a booking on "Fact [sic] the Nation.' "

Webb appeared on the CBS program Sunday morning to announce that Williams and the Tea Party Express -- which has held a series of events across the country to generate support for the movement -- no longer were part of the National Tea Party Federation.

"We, in the last 24 hours, have expelled Tea Party Express and Mark Williams from the National Tea Party Federation because of the letter that he wrote," Webb said of Williams' blog post that satirized a fictional letter from what he called "Colored People" to President Abraham Lincoln.

NAACP President Ben Jealous met Williams' statement by telling CNN, "Good riddance, Mark Williams." But he praised Tea Party activists like Webb, who is African-American, for standing up and "self-policing" their movement.

"As the movement grows up, you have to act responsibly and they have to keep doing what they just did to Mark Williams and make it clear there is no space for bigots here, period," Jealous said.

Williams wrote the incendiary blog post in response to an NAACP resolution that called on Tea Party leaders to crack down on racist elements in the movement. The 101-year-old civil rights group cited signs carried at Tea Party events and racial slurs reportedly shouted at black members of Congress during the heated debate over health care as examples of racism in the movement.

"Dear Mr. Lincoln," began the fictional letter posted by Williams. "We Coloreds have taken a vote and decided that we don't cotton to that whole emancipation thing. Freedom means having to work for real, think for ourselves, and take consequences along with the rewards. That is just far too much to ask of us Colored People and we demand that it stop!"

Williams, a conservative talk radio host, said the post was intended as satire. He took it down as criticism mounted.

Some political leaders interviewed on Sunday talk shows also said the Tea Party movement itself wasn't racist, but needed to distance itself from any elements that bring prejudice and bigotry to its events.

"There are some members who have used the Tea Party -- whether it's the Tea Party itself, there are some individuals who have tried to exacerbate racial tensions in this country," House Majority Leader Steny Hoyer, D-Maryland, said on CNN's "State of the Union." "I have seen some virulent fliers that have been directed at our members, clearly referencing race, the president's race and race generally."

On the same show, however, Senate Minority Leader Mitch McConnell, R-Kentucky, steered clear of the issue, saying: "I am not interested in getting into that debate."