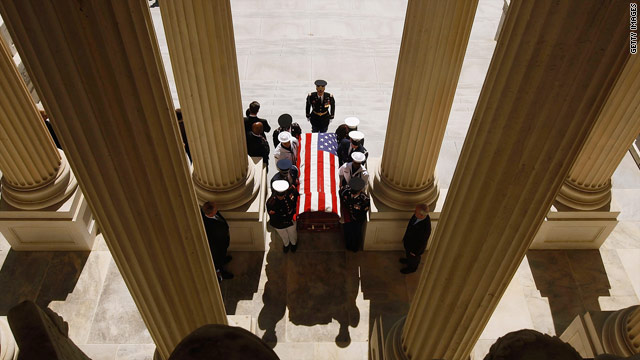 Washington (CNN) -- The body of Sen. Robert C. Byrd arrived at the Capitol on Thursday, a rare honor for a man who rose from the poverty of Depression-era West Virginia to become the longest-serving member of Congress in history.

Byrd, who died Monday at the age of 92, will lie in repose in the Senate chamber until 3:45 p.m. Thursday. His body will be transported to Charleston, West Virginia, Thursday evening, where it will remain at the state capitol overnight.

Byrd will be buried Tuesday after a funeral service in Arlington, Virginia.

Vice President Joe Biden and Secretary of State Hillary Clinton are among the dignitaries expected to pay their respects to Byrd on Capitol Hill Thursday. While in the Senate, his casket will be displayed on the same catafalque used for Abraham Lincoln, John F. Kennedy, Ronald Reagan and Thurgood Marshall, among others.

Since World War II, according to the Senate historian's office, only two senators have lain in repose in the Senate chamber: Wisconsin's Joe McCarthy in 1957 and North Dakota's William Langer in 1959.

President Barack Obama has ordered flags on federal buildings to fly at half-staff until next week's burial, except for Independence Day. A proclamation issued by Obama said the order was given "as a mark of respect for (Byrd's) memory and long-standing service."

Byrd, a nine-term Democrat, was known as a master of the Senate's arcane rules and as the self-proclaimed "champion of the Constitution," a staunch defender of congressional power.

His speeches were laced with references to poetry and the Greek and Roman classics, often punctuated by the brandishing of his pocket copy of the national charter.

He also was known as the "King of Pork," using powerful positions in Congress to steer federal spending to his home state -- one of the nation's poorest.

Byrd viewed the title as a badge of honor.

"I have no apology for it," he once said. "When I am dead and am opened they will find West Virginia written on my heart."