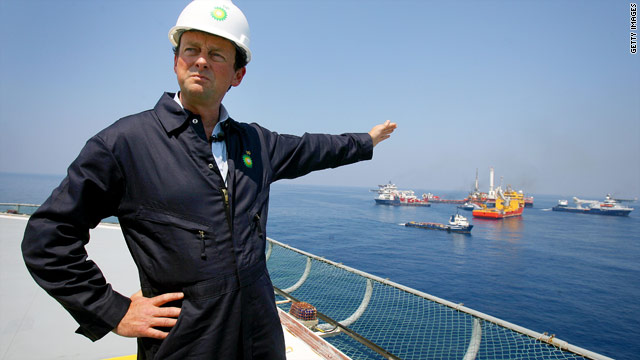 (CNN) -- Lawmakers on Thursday are getting their first chance to grill BP CEO Tony Hayward, the man fighting to save his and his company's reputation as BP tries to stop the oil gushing into the Gulf of Mexico.

Hayward is testifying before the House Energy and Commerce Subcommittee on Oversight and Investigations, which is chaired by Rep. Bart Stupak, D-Michigan. The hearing is examining what caused the April explosion on the Deepwater Horizon rig and the oil disaster.

A letter to Hayward from House Energy and Commerce Committee Chairman Henry Waxman, D-California, says a congressional investigation alleges that the besieged oil company took a low-cost, speedy approach to drilling the now-broken deepwater well responsible for the growing spill in the Gulf of Mexico.

The hearing comes a day after Hayward met with President Obama, who last week said that if it were up to him, Hayward would have been fired.

In his opening remarks, Hayward struck an emotional tone, acknowledging the loss of life and reminding the Gulf Coast's residents of the company's longstanding commitment to the region.

"I want to speak directly to the people who live and work in the Gulf region: I know that this incident has had a profound impact on your lives and caused great turmoil, and I deeply regret that," Hayward said.

Addressing the anger and frustration coming from the public, Hayward said, "I know that these sentiments will continue until the leak is stopped and until we prove through our actions that we are doing the right thing."

In the eight weeks since the rig explosion, Hayward has become the punching bag for Gulf Coast residents who are furious that the oil is still spewing.

But the company's effort to repair its image has been countered by its inability to contain the oil and Hayward's penchant for gaffes.

A month after the rig sank, Hayward told Sky News that the environmental impact of the disaster would likely be "very, very modest." He later described the oil spill as an "environmental catastrophe."

Hayward also took heat for telling The Guardian that the size of the spill is "relatively tiny" in comparison to the "very big ocean."

BP's top man faced the most criticism from his poorly worded apology for the disruption the largest oil spill in U.S. history has caused. "There's no one who wants this over more than I do. I would like my life back," he said.

In response to Hayward's comment, Christopher Jones, a brother of one of the 11 workers killed in the oil rig explosion, told the Senate Judiciary Committee, "Mr. Hayward, I want my brother's life back."

Hayward issued another apology for what he said was a "hurtful and thoughtless comment."

"When I read that recently, I was appalled. I apologize, especially to the families of the 11 men who lost their lives in this tragic accident," he said on his Facebook page.

In the past two months, Tony Hayward has become a media fixture and a household name.

Hayward, a 53-year-old Briton, grew up outside London and started at BP as a geologist in 1982. He held technical and commercial jobs in Europe, Asia and South America in the 1990s, according to his bio from BP. By 1997, he was on the executive committee, and in May 2007, he was named CEO.

Hayward replaced Lord John Browne, who resigned three months earlier than planned after a judge cleared the way for a newspaper to publish details about an alleged homosexual relationship that Browne had.

When Hayward took over, BP was still recovering from the March 2005 explosion at a Texas City, Texas, refinery that killed 15 workers and a spill in Alaska the following year that was blamed partially on poor maintenance of pipelines.

Hayward vowed to turn the company around. Pressed on how he'd be different from his predecessor, Hayward reportedly replied, "John Browne was John Browne. I'll be me. There is not a lot more I can say."

Before April, there had been no major disasters for the company since the Alaskan pipeline incident. Financially, the company has increased revenues every year since Hayward took over, with the exception of 2009, a year plagued by the recession. Profits have been strong, but up and down.

Last year, Hayward made $6 million. Despite calls for him to quit, Hayward insists he has no plans to step down.

Asked if the president trusts Hayward, White House press secretary Robert Gibbs told CNN, "It's not about trusting Tony Hayward or anybody at BP. It is about ensuring that they live up to each and every responsibility that they have and that's exactly what the president and everybody in this administration will do."

This month, BP's stock hit a 14-year-low. Since the oil disaster began, the company has lost half of its market value.