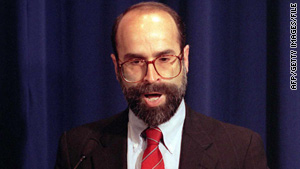 A White House statement said Bromwich would "lead the effort to reform the Minerals Management Service," an Interior Department agency accused of corrupt practices and poor oversight of offshore drilling in the run-up to the Gulf oil disaster.

"For a decade or more, the cozy relationship between the oil companies and the federal agency was allowed to go unchecked," Obama said in a White House statement. "That allowed drilling permits to be issued in exchange not for safety plans, but assurances of safety from oil companies. That cannot and will not happen anymore."

According to the statement, Bromwich will develop plans "for a new oversight structure, replacing long-standing, inadequate practices with a gold-standard approach for environmental and safety regulation."

"He has a mandate to implement far-reaching change and will have the resources to accomplish that change," the statement said.

Bromwich, a lawyer who specializes in internal investigations and regulatory matters, was the Justice Department inspector general from 1994-1999 under President Bill Clinton. The job entailed investigating alleged corruption and misconduct in the department.

A graduate of Harvard College, Harvard Law School and Harvard's John F. Kennedy School of Government, Bromwich was a federal prosecutor in New York and served as an associate for the independent counsel office in the Iran-Contra case.