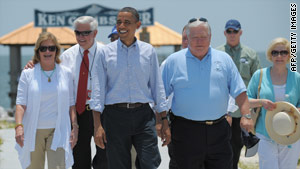 Speaking at a Coast Guard staging facility in Theodore, Alabama, Obama said he hopes to hammer out with top BP officials Wednesday a new structure for processing claims so that they "are dealt with justly, fairly, promptly."

He said preliminary talks on the restructuring have already begun, but was cautious about how much progress can be made before Wednesday's meeting.

He said that cleanup and containment of the spill won't happen overnight. "It's going to take time for things to return to normal."

Obama also announced an effort to ensure that seafood from the Gulf of Mexico remains safe to eat.

Under the new comprehensive seafood initiative, federal authorities will increase inspections of seafood processors, strengthen surveillance programs and monitor fish caught outside restricted waters, Obama said. "Seafood from the Gulf today is safe to eat, but we need to make sure that it stays that way," he said.

The president arrived in Gulfport, Mississippi, earlier in the day -- his first stop on a two-day tour of the states, including Alabama and Florida, most affected by the oil disaster. This is his fourth trip to the Gulf Coast since the oil began to gush nearly two months ago, though previous trips were limited to Louisiana.

At the end of the briefing, Obama encouraged tourists to not cancel plans to vacation in the region.

"There's still a lot of opportunity for visitors to come down here -- a lot of beaches that are not yet affected or will not be affected," Obama said.

"One of the best ways to help is to come down here and enjoy the outstanding hospitality," the president said.

The president, who canceled a trip to Indonesia and Australia, has faced criticism that he hasn't been fully engaged in the crisis.

Gulf Coast resident Jim Hall said he is ready to see more action and less talking from the administration.

Video: Heat's on Obama in Florida

Video: Honore: 'Find this oil and kill it'
RELATED TOPICS

"Looking at the overall picture, I wish he would take more assertive power in what's going on as far as protection of our environment. My property values have probably dropped 30 percent, 40 percent in the last 50 days," said Hall, who has lived and fished on the Gulf since the '80s.

Harry Jemison, owner of Jemison's Bait-N-Tackle shop, said his business was on course for a record year, but after the oil spill, everyone is "afraid to fish."

Obama acknowledged the toll of the massive oil spill.

"There's a sense that this disaster is not only threatening our fishermen and our shrimpers and oystermen, not only affecting precious marshes and wetlands and estuaries ... there's also a fear that it could have a long-term impact on a way of life that has been passed on for generations," Obama said.

"We are absolutely committed to working with [local and state officials] to do everything in our power to protect the Gulf Coast way of life so that it's there for our children, our grandchildren and our great grandchildren," he said.

Following his visit to the Gulf Coast, Obama will update the nation about the situation in a prime time address from the Oval Office.

Obama will talk about the oil-leak containment strategy, the reorganization of minerals management at the Department of the Interior and the beginning of a process to restore the Gulf to a place better than it was before the Deepwater Horizon exploded, a senior administration official said.

BP has until midnight to present a new plan to the White House for containing the oil. Obama is scheduled to meet with BP executives in person at the White House on Wednesday.

The president plans to push BP to create a BP-funded escrow account that will pay for damage claims from the oil spill, said David Axelrod, a senior adviser to Obama. In addition, Axelrod said, the plan would call for an independent third party to handle the claims process.

"The president will use every legal device at his disposal to make sure that this money is escrowed and that there is an independent administrator so that claims are not slow-walked, people can get the relief they need in a timely fashion and that we don't create more victims from this terrible disaster," Axelrod said.