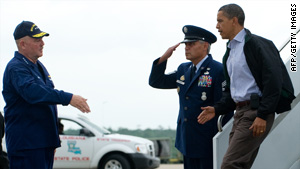 President Obama arrives in Louisiana on Friday, his second trip to the area in two weeks.
STORY HIGHLIGHTS

Washington (CNN) -- President Barack Obama returned to Louisiana Friday -- the president's second trip to the Gulf region in two weeks as the administration continued its efforts to contain the BP oil spill and stay on top of what has now become a major political issue.

Among other things, Obama was scheduled to visit to Louisiana's Grand Isle and meet with local business leaders directly impacted by the spill. Shortly after arriving, he huddled with U.S. Coast Guard Adm. Thad Allen -- the federal government's response manager -- and both state and local elected officials.

Obama's latest visit came as BP finally started to siphon oil from the ruptured undersea well. BP is currently preparing to shut four vents on top of a containment cap from which oil has been escaping into the ocean. Closing the vents would greatly reduce the amount of oozing crude.

No one, however, can say with certainty whether BP's latest effort to contain and recover the oil will succeed.

Obama refused to provide details about attempts to seal off the well, but said "it does appear that the cap at least for now is holding." He quickly added, however, that it's "way too early to be optimistic." Officials should know more about the success or failure of the effort in next 24 to 48 hours, he said.

"I'm long out of the prediction business on this," White House Press Secretary Robert Gibbs told reporters on Air Force One en route to Louisiana. "Everyone is hopeful that this works."

The president later stressed BP's "moral and legal obligations" to the Gulf region, promising that federal officials will be watching BP to ensure the company isn't "lawyering up."

Obama noted that BP is spending millions of dollars on television ads designed to improve the company's image, as well as distributing billions in sharehold dividends. I do not want BP "nickel and diming folks" in the Gulf, he said.

Obama, who previously said he is "furious at (the) entire situation," has been criticized by some political observers for failing to show enough empathy and emotional involvement in the response to the spill. Fifty-one percent of adult Americans disapproved of Obama's handling of the spill in a May 21-23 CNN/Opinion Research Corp. poll, while 46 percent approved.

Obama told CNN's Larry King Thursday that "I'd love to spend my time venting and yelling at people (about the situation in the Gulf), but that's not the job I was hired to do. My job is to solve this problem."

Democratic strategist James Carville told CNN Friday he doesn't worry that Obama "doesn't emote that well or something like that." But the president, he said, "is a man of formidable intelligence. He has a ton of power, and I think what we want to do is feel that power ... and let people feel the wrath (and know) that he's standing up" for them.

Crist expressed some sympathy for Obama. Crist acknowledged Friday the situation in the Gulf is "emotional," but asserted that the president is "trying to do the best job he can."

Daily Beast political columnist John Avlon said Friday that while part of Obama's "narrative" is that "he's cool," the president needs to show he's "feeling the pain of the problem on the ground. We're a quick fix culture (and) we have a vivid problem unfolding in the Gulf. That's starting to affect (the) perception of this administration in the larger sense."

The BP well erupted after an explosion and fire on the leased Deepwater Horizon drilling rig on April 20 that killed 11 people. The rig sank two days later, leaving up to 19,000 barrels (798,000 gallons) of oil pouring into the Gulf daily, according to federal estimates. BP, rig owner Transocean and oilfield services contractor Halliburton have all pointed fingers at each other for the disaster.