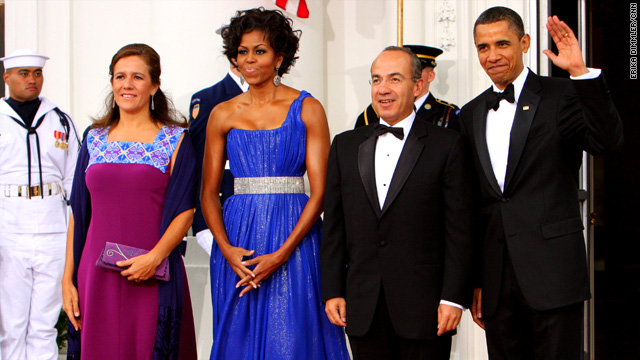 Washington (CNN) -- The United States' first couple welcomed their Mexican counterparts Wednesday to the second state dinner of the Obama administration, a night of pomp and ceremony that both leaders hope will demonstrate the important relationship between the North American neighbors.

In an unrehearsed moment, a White House aide slipped while walking out with the Obamas before their guests arrived, and both the president and first lady immediately called out, "Don't take that picture," to the media gallery.

The more than 200 invited guests, including diplomats, White House officials and celebrities, including actresses Whoopi Goldberg and Eva Longoria-Parker, arrived through a separate entrance for the Mexican-themed dinner and musical performances.

Later, the two leaders started the dinner in the East Room by toasting the U.S.-Mexico partnership and their effort to fulfill the dreams of their nations' children.

Obama laced his toast with some playful remarks, mentioning Mexico's contributions to arts and science along with "some very good food, including the food of the gods, chocolate." At another point, Obama prompted laughter with a joke aimed at Mexico's passion for soccer, noting the nation had, like the United States, "a pretty good soccer team."

"In the fight for your country's future, you have shown extraordinary courage, extraordinary bravery, and you and the Mexican people have a full and committed partner in the United States," Obama said.

Calderon thanked his hosts, twice making special reference to the charm of the first lady, and emphasized the friendship and partnership between the two countries.

He concluded by responding to Obama's reference to Mexican poet Octavio Paz's sentiment that people must deserve their dreams.

Gallery: A look at past state dinners

"Both of us have dream," Calderon said, looking at Obama. "Those dreams are related to our people, and we try every day to deserve those dreams and we will reach them."

The White House promised enhanced security measures to keep out the uninvited. At the first state dinner, in November, gate-crashers shook hands with the president.

Wednesday night's dinner was the eighth state dinner honoring Mexico, all since 1967, reflecting the growing importance of the U.S. southern neighbor in the past half-century.

Guests sat at tables for 10, some rectangular and some round. The head table with both first couples seated 20 people, including Supreme Court Justice Anthony Kennedy and Senate Majority Leader Harry Reid.

Tables were covered in boldly striped linens made in three hues of blue, intended to resemble ripples of water, the White House said.

The china, from the White House collection, was from the Clinton and Eisenhower presidencies for a meal accenting both American and Mexican cuisine. Guests dined on jicama and fruit in a citrus vinaigrette and ceviche of Hawaiian opah, followed by Oregon beef in Oaxacan black mole with black bean tamalon and grilled green beans.

After the meal, the diners will move into a tent erected on the South Lawn to be joined by additional guests for performances by pop star Beyonce and Mexican performers Rodrigo y Gabriela, along with the President's Own United States Marine Band.

The tent also featured artistically rendered Monarch butterflies hanging in the air in a tribute to Calderon's birthplace of Michoacan, Mexico.

"The Monarch butterfly is the queen of butterflies, because every winter it flies down from Canada to Michoacan, my homeland, looking for the warmth of the Mexican people," Calderon said in brief remarks, again thanking his hosts.

Obama paid tribute to the musical traditions of both nations and said he hoped to get Calderon and his wife out on the dance floor later in the evening.