One year after party switch: Praise, criticism for Sen. Specter 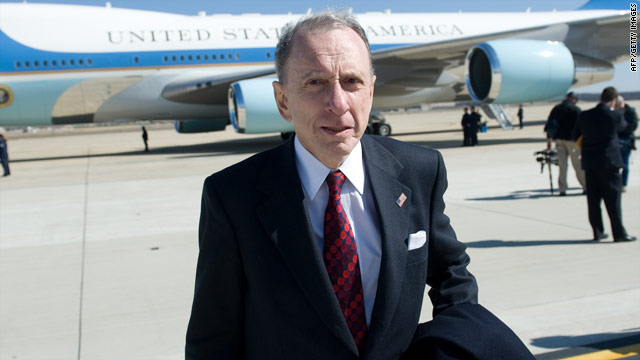 Washington (CNN) -- One year after he rocked the political world by switching parties because he didn't think he could win a Republican primary, Sen. Arlen Specter is fending off a serious Democratic primary challenge and calling for bipartisanship to pass financial reforms.

"As today completes one year since my return to the Democratic Party, I have a few observations on what we should do as senators, not as Democrats or Republicans, to tend to the nation's business in these difficult days," Specter said Wednesday in a statement delivered on the Senate floor.

Specter states that both parties agree financial legislation is necessary and adds that extraordinary circumstances call for Republicans to join Democrats in passing legislation to prevent another economic crisis.

Senate Democrats failed Wednesday -- for the third time in less than 48 hours -- to muster the 60 votes needed to start debating Wall Street reform on the Senate floor. But then Republicans agreed to drop their filibuster and begin debate. Democrats and Republicans still disagree about key provisions.

At the time of the party flip, Specter said that the Republican Party had moved "farther and farther to the right," pushing him more in line with Democrats. He cited the difficulty he faced in winning the Republican primary against former Rep. Pat Toomey as a factor.

To face Toomey -- the former head of the Club for Growth, a limited-government and anti-tax organization -- in the general election, Specter needs to first win his Democratic primary with two-term Rep. Joe Sestak, a former Navy admiral.

Sestak plans to mark the anniversary of Specter's party switch with what his campaign calls a major speech Wednesday night in Washington.

"Senator Specter's apparent willingness, particularly in an election cycle, to say or do anything for his own political survival -- a willingness to go back on his own positions even as he questions the integrity of his challengers' -- represents what is wrong and broken in Washington," Sestak will say, according to excerpts released by his campaign in advance.

The ad wars in the Democratic primary battle have heated up in advance of the May 18 contest. A recent commercial by Specter questions Sestak's military record.

According to a Quinnipiac University poll conducted earlier this month, Specter leads Sestak 53 percent to 32 percent in the primary match-up. But only 36 percent of Pennsylvania voters said that Specter deserved to be re-elected.

Republicans are also slamming Specter on the anniversary.

"Unfortunately for Pennsylvanians, the only thing consistent about Arlen Specter is that he will always put his own political preservation before the people in his state," says National Republican Senatorial Committee spokeswoman Amber Marchand.

"No Pennsylvanian has served that state in the United States Senate longer than he has," Reid said on the floor of the Senate. "His moderate voice has been an asset to our diverse caucus, and I look forward to working with him for many years to come."

Before his switch, Specter, a Kansas native and former Philadelphia district attorney, was a leading Republican on the Senate Judiciary Committee for much of the past two decades, serving as its chairman from 2005 to 2007.

He has survived bouts with cancer three times; most recently, he underwent chemotherapy for Hodgkin's disease in 2005.