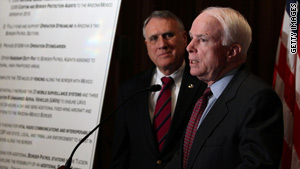 Washington (CNN) -- Sens. Jon Kyl and John McCain, both Republicans from Arizona, called Monday for the immediate deployment of 3,000 National Guard troops to the border with Mexico and other steps to increase security.

Illegal aliens crossing the border into Arizona from Mexico were causing a spike in crime and other problems that needed immediate attention, said Kyl and McCain at a news conference with two Arizona sheriffs.

"The situation has spiraled out of control," McCain said, noting that 17 percent of those caught trying to illegally enter Arizona from Mexico had U.S. criminal records.

McCain and Kyl repeated a past call for 3,000 National Guard troops to be sent to the border right away, along with federal funding for another 3,000 U.S. Customs and Border agents to be deployed along the Arizona-Mexico border by 2015.

In addition, their 10-point plan calls for a double-row border fence, increased mobile surveillance of the border region, more federal funding and hardship duty pay for border patrol agents in the most dangerous areas.

"You can't live in Arizona and not have this problem every day," Kyl said. "People are fed up."