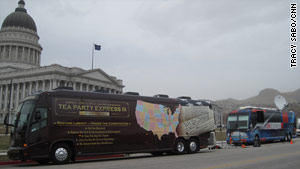 (CNN) -- When it comes to the Tea Party movement, the stereotypes don't tell the whole story.

Here's what you often see in the coverage of Tea Party rallies: offensive posters blasting President Obama and Democratic leaders; racist rhetoric spewed from what seems to be a largely white, male audience; and angry protesters rallying around the Constitution.

But here's what you don't often see in the coverage of Tea Party rallies: Patriotic signs professing a love for country; mothers and fathers with their children; African-Americans proudly participating; and senior citizens bopping to a hip-hop rapper.

Last week, I saw all of this during a five-city Western swing as the Tea Party Express national tour made its way across the country. CNN was along for the ride, and I was charged with planning CNN's coverage for five stops in two states: St. George, Provo and Salt Lake City, Utah; and Grand Junction and Denver, Colorado.

This latest Tea Party caravan kicked off on March 27 in Senate Majority Leader Harry Reid's hometown of Searchlight, Nevada. It is scheduled to make 45 stops before rolling into Washington on April 15, not so coincidentally on "Tax Day."

CNN was the only national news outlet on this Western leg of the tour. We had a full team on the ground: myself, correspondent Ed Lavandera, producers Tracy Sabo and Jim Spellman and the crew of the CNN Express bus. For Spellman, it was his third Tea Party Express tour.

Together, we beamed out images of the anger and the optimism, profiled African-Americans who are proud to be in the Tea Party's minority and showed activists stirred by "God Bless America" or amused by a young rapper who strung together rhymes against the president and Democrats.

Being at a Tea Party rally is not quite like seeing it on TV, in newspapers or online. That's the reason CNN is covering this political movement -- and doing so in ways few others can or choose to do.

It is important to show the colorful anger Americans might have against elected leaders and Washington. But people should also see the orange-vested Tea Party hospitality handlers who welcome you with colorful smiles.

There were a few signs that could be seen as offensive to African-Americans. But by and large, no one I spoke with or I heard from on stage said anything that was approaching racist.

Almost everyone I met was welcoming to this African-American television news producer.

And though speakers railed against the "lame-stream media," activists and their leaders praised CNN, especially for being the only national media outlet riding along for the post-weekend stops. Some of them e-mailed me after my trip, thanking our crew for fairly giving them a voice.

Speaking of stereotypes, I did get a few curious stares as I pulled up to the rallies. But not because of my skin color. It was because of my car rental: a Volvo.

I hadn't intended to rent a Volvo, a car stereotyped as the favorite of liberal elites. But upon arriving at the Las Vegas airport, the rental company was out of American-made cars with a GPS system and satellite radio. I had nearly a thousand miles of driving ahead, through desert, mountains and cities. Since it had GPS and satellite radio, the Volvo fit the bill.

Outside of the occasional stare, none of the real cowboys at the rallies came up to the Volvo and asked me, "Hey buddy -- where's your cashmere sweater and arugula?" If they had, I might have pointed out that until just recently, Volvo was owned by Ford Motor Co., an American icon.

Jokes aside, stereotypes can loom large when they're magnified through a television lens, on the radio, the pages of a newspaper or in the vastness of the Internet.

So, it's important that with a newsworthy, growing phenomenon like the Tea Party movement, viewers and readers fully understand what they see and what they don't.