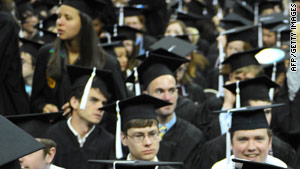 (CNN) -- Tucked into the legislation President Obama signed Tuesday is an important change that didn't get near the attention of health care reform: a sweeping overhaul of the nation's student loan program.

The law changes how student loans are administered. Borrowers used to be able to get college loans from either banks or the federal government. In return for administering loans to students, private banks received federal subsidies to provide student loans.

Under the new law, private banks will no longer handle federally backed student loans. Instead, the federal government will be the only lender to students. Supporters say the overhaul eliminates the fees banks get to act as the middlemen, saving the government billions of dollars.

Here's what you need to know about the new law.

When will the changes take effect?

Student loans will originate through the new system starting on July 1, 2010. The government will make about $500 billion in direct loans loans in the first 10 years, according to an estimate from the nonpartisan Congressional Budget Office.

Does the bill affect existing loans?

It doesn't change loans that students have taken out but it does lower the cap on monthly payments -- from the current 15 percent of discretionary income to 10 percent shorten the repayment window from 25 years to 20, after which the balance might be forgiven.

How does this affect the Pell grant program?

Over the next 10 years, $36 billion of the savings from the student loan reform will go into the Pell grant program, which provides funding for low-income students to go to college.

The White House says the new law covers the expected budget shortfall and will keep the program stable in future years.

What's the impact on the deficit?

The CBO says student loan reform will result in a net savings of $62 billion over the next decade.

The House Committee on Education and Labor says the provisions will reduce the deficit by at least $10 billion over the next 10 years.

What are the criticisms?

Critics blast the education reforms as a government takeover of the student loan system.

Banks predict that thousands of jobs will be lost in the private student banking industry.

Sources: The White House, House Committee on Education and Labor