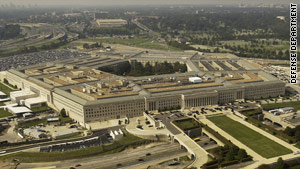 The Pentagon is investigating an alleged ad hoc spy program in Afghanistan and Pakistan.

Washington (CNN) -- A former high-ranking CIA official who was involved in the Iran-Contra scandal has worked on an alleged ad hoc spy program that the Pentagon is investigating, CNN has learned.

Duane "Dewey" Clarridge -- who was pardoned for his alleged role in the Reagan-era scandal by President George H. W. Bush in the waning hours of his presidency in 1992 -- is using contacts in Afghanistan and Pakistan to obtain information for the Pentagon, according to former government officials familiar with the current program.

They declined to be named because of the sensitivity of the issue.

The Pentagon has launched an assessment of the roles of at least three contractor companies with more than $20 million in contracts, according to Pentagon officials

He needs "a factual baseline from which to determine whether or not systemic problems exist," and how to fix them if they do, Defense Department spokesman Geoff Morrell said Tuesday.

The two-week survey will be led by a small team of senior military and Defense Department officials, he said.

The assessment was prompted by an investigation -- currently under way -- into a program led by Michael Furlong, a Defense Department official who oversaw contracts aimed at gathering information about Afghanistan and Pakistan.

The program was meant to be limited to gathering what is known as "open-source information," in which publicly available facts are gathered from, for example, local media and public events.

Some of the contractors with the program -- retired CIA officers and former military commandos -- may have instead hired local agents to gather information on the specific locations and movements of particular individuals and passed it along to military officials for possible lethal strikes, according to government officials and private-sector businessmen familiar with the investigation.

Federal laws and regulations generally prohibit contractors from directly engaging in intelligence collection because it is considered a crucial government function.

The Pentagon is seeking to find out both whether the law was violated and whether funds were inappropriately diverted to conduct these alleged operations.

"This is something that I need to know more about, but we do have reviews and investigations going on to find out what the story is here, find out what the facts are, and if it's necessary to make some changes, I'll do that," Gates said Monday.

Documents provided to CNN detail sensitive information that contractors gathered, including word of a meeting between Afghan President Hamid Karzai's brother and Mullah Baradar, a top Taliban leader who was arrested weeks later in Pakistan. At another meeting with Taliban commanders, an audio message from the reclusive leader Mullah Omar was played, in which he directed who would lead operations after a key member was captured. Another document details the comings and goings at a safe house in Kabul, Afghanistan, used by suspected members of the Haqqani insurgent network.

Concern within the Central Intelligence Agency about the contract played a role in prompting the investigation, according to officials.

Rear Adm. Gregory Smith, a spokesman for the U.S.-led force in Afghanistan, told CNN last week that elements of Furlong's project were not clear.

"There was ambiguity about how they were going to collect information," he said, and about whether Afghans were to be used to do the work, and how the information might be used.

"None of us were comfortable with what this contract meant. We wanted to know how they were going to glean information," Smith said.

Smith said he subsequently terminated Furlong's effort last year because of his concerns. He estimates $6 million to $7 million of the funds allocated were spent and does not know what happened to the balance of the contract money.

Clarridge, the former CIA official allegedly involved in the ad hoc spy ring, worked for the agency for 33 years, heading the agency's Latin American and European divisions and setting up its Counterterrorist Center in 1986, according to a Publisher's Weekly review of his book "A Spy For All Seasons."

He was indicted in 1991 on federal charges of lying to Congress and the Tower Commission, which investigated the Iran-Contra affair, the review says. Investigators said Clarridge was the man who put then-Marine Col. Oliver North in charge of sending money and weapons to anti-Communist fighters in Nicaragua in the 1980s, in contravention of congressional mandates.

Clarridge always maintained he was innocent, referring to the scandal as "the Iran-Contra nonsense," Publisher's Weekly said.