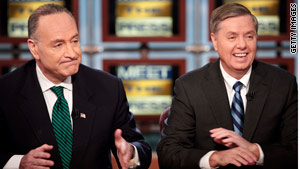 Washington (CNN) -- Thousands of people are expected to pour into Washington for a Sunday rally demanding immigration reform, launching the first public battle over the issue since the announcement of a new bipartisan plan endorsed by President Obama.

While the nation will be focused largely on a more immediate debate -- an expected vote over health care reform -- the march on the National Mall will be setting the stage for a fight over another of the most contentious issues facing the country.

The organization Reform Immigration for America, which supports a path to citizenship for those in the United States illegally, says the changes it wants to see will help bring about "economic justice for all Americans."

In response, the Federation for American Immigration Reform -- which staunchly opposes amnesty -- called on Americans to contact their representatives and demand tougher borders and an end to illegal immigration. FAIR says it seeks "effective, sensible immigration policies that work for America's best interests."

"The American people deserve more than empty rhetoric and impractical calls for mass deportation," the two senators behind the new immigration plan wrote Friday in the Washington Post.

"Our plan has four pillars: requiring biometric Social Security cards to ensure that illegal workers cannot get jobs; fulfilling and strengthening our commitments on border security and interior enforcement; creating a process for admitting temporary workers; and implementing a tough but fair path to legalization" for the 11 million immigrants in the United States illegally, the two lawmakers wrote.

The plan will "require an effective employment verification system that holds employers accountable for hiring illegal workers," the senators write, including a "tamper-proof ID system."

The plan also would create "a zero-tolerance policy for gang members, smugglers, terrorists and those who commit other felonies after coming here illegally."

After meeting with Schumer and Graham -- both powerful figures within their parties -- earlier this week, President Obama issued a statement saying he was "pleased" to see their "promising, bipartisan framework which can and should be the basis for moving forward. It thoughtfully addresses the need to shore up our borders, and demands accountability from both workers who are here illegally and employers who game the system."

The "critical next step," Obama said, is turning the framework into legislation. He called on Congress "to act at the earliest possible opportunity."

"After extensive discussions with the president, I believe we have a health care bill I can vote 'yes' for, and I believe we have a commitment to move forward on a comprehensive immigration reform package as soon as possible," Gutierrez said in a statement Thursday.

Gutierrez added that he believes Obama "gets that we cannot ensure the health of our nation if we continue to ignore the 12 million undocumented immigrants living in the shadows. And he agrees that if we are going to have health care that works, if we are going to have a system that cuts costs and streamlines the delivery and keeps our children healthy, then we fundamentally need to enact comprehensive immigration reform."