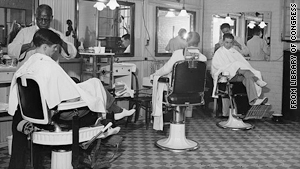 Barbers cut customers' hair at the Senate barber shop in the late 1930s.

(CNN) -- The battle over health care and whether to use the shortcut tactic known as reconciliation to push it through has thrust the Senate parliamentarian into the spotlight.

Never heard of the Senate parliamentarian? You're not alone.

It takes thousands of people like him to keep Capitol Hill -- and the U.S. government -- running.

"It's sort of like a little city full of people here," Senate historian Donald Ritchie said.

Here are some Capitol Hill jobs that those outside the Beltway may have never heard of:

It's up to the Senate parliamentarian, Alan Frumin, to advise lawmakers on what can and cannot be passed via reconciliation, which requires a simple majority of 51 votes instead of 60 to advance legislation in the Senate.

With reconciliation a likely step on the path to health care reform, expect to see Frumin in the headlines for a while.

Keeper of the stationery

The keeper of stationery, like many positions on Capitol Hill, dates back to the early days of Congress. Back then, the secretary of the Senate was hired to buy papers and pens and ink for lawmakers, Ritchie said. Clerks were hired based on penmanship since everything was handwritten.

The secretary of the Senate still has a stationery room, which is looked after by the keeper of stationery. Today, that room is more of an office supply shop, where lawmakers' staff can pick up computer paper and ink cartridges.

The House and Senate each have similar stores, which are not open to the public.

The cloakrooms are off the floor of the House and Senate chambers, and they are similar to what other offices call break rooms. Lawmakers might work on cutting deals in the cloakroom, or they might just kick back and watch television.

Each party has its own cloakroom. Floor assistants and cloakroom attendants are among those who work in the rooms. Their duties include alerting lawmakers when votes are coming up, telling them whether the chamber will be open on a snow day and working with pages to deliver messages.

Hairstylists have worked on Capitol Hill since the 19th century, Ritchie said. Although haircuts were free for lawmakers when the shop first opened, that's not the case anymore. In addition to hairstylists, the Senate hair care staff also includes a shoe shiner and a manicurist.

The barber shop and beauty parlor are open to the public.

The reading clerk, also known as the legislative clerk, reads the titles of bills. In the Senate, the clerk also calls the role when votes take place.

The reading clerk is also the lucky person who has the task of reading aloud 1,000-plus-page bills when lawmakers request it.

The Senate and House each have their own gift shops. There are also two gift shops at the Capitol Hill Visitor Center.

Architect of the Capitol

The Architect of the Capitol is responsible for the upkeep and the preservation of landmarks throughout Washington, including the Capitol, Visitor Center, Supreme Court, Library of Congress and U.S. Botanic Garden. The agency employs 2,500 workers.

The House and Senate each have a sergeant-at-arms, who handles security for lawmakers, their staff and visitors.

The sergeants, along with the Architect of the Capitol, serve on the Capitol Police Board.

The House sergeant-at-arms introduces the president at the State of the Union address.

When the office of the House doorkeeper was abolished in 1995, the House sergeant-at-arms absorbed some of that position's duties, along with the clerk of the House and the chief administrative officer.

The subways shuffle lawmakers from their offices to the House and Senate floor.

"Anything you need to have an office going, we've got people doing it here," Ritchie said.

From carpenters to book binders to upholsterers to picture framers to light bulb changers -- the maintenance workers try to counter the wear and tear of the millions of people who visit the Capitol.