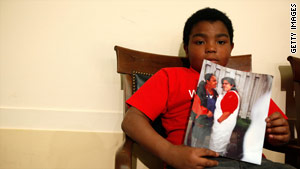 (CNN) -- While most 11-year-olds would probably celebrate their birthdays with a party, Marcelas Owens was on the steps of Capitol Hill rallying for health care reform.

He knows firsthand what's its like when a family loses health insurance.

"I came out here for health care, I got involved because my mom was a health care activist, she testified and participated in rallies. She wanted people to have health care and not wait till management level to be offered health care," said Marcelas.

The fifth-grader is continuing the battle his mother can no longer fight. "She was diagnosed with pulmonary hypertension, she started missing work, and when she was there she was sent home early," he said.

"She lost her job and her health care with it" said Marcelas.

The 11-year-old's mother, Gina, passed away, but Marcelas says he believes if she had the proper care she would be alive today.

"I believe that if she did have her health care, she would be recovering a little at a time."

On Thursday, Owens was on the hill with Majority Leader Harry Reid and some other lawmakers trying to prove a point.

"Health care is not a privilege, it's a right," he said.

Marcelas' appearance on Capitol Hill was the latest in a series of events featuring ordinary individuals struggling with the health care system. Both Democrats and Republicans have used such events to illustrate radically different positions on the hot button reform issue.

Video: Dems 'don't have the votes'

Republicans have argued that individuals in the position of the Owens family would actually be harmed by the passage of the Democrats' health care plan. GOP leaders have asserted that the Democratic plan would do little to control spiraling medical costs and would actually result in an increase in premiums while hammering many middle class families with higher taxes.

At the same time, they warn, it would add to record federal budget deficits.

For Marcelas, the issue is personal. "I don't want any other kid to go through the pain that our family has gone through," he said, his voice cracked with emotion. "I want Barack Obama and Congress and everybody to come together and help the health care bill pass."

Appearing with Marcelas, Reid said, "This is about letting people have insurance who need it. It's not about process, it's about pain, real pain suffered by real people like Marcelas and Gina."

The White House announced Friday that Obama has pushed back his departure for an upcoming trip to Asia to help Democrats prepare for a final push on health care reform.