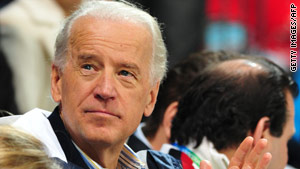 "Not at any time was the VP in any danger," said Olivier Lapointe, spokesman for the Vancouver 2010 Integrated Security Unit.

The man, who was not identified, used fake credentials to get inside British Columbia Place, the site of the 2010 Winter Olympic opening ceremony Friday, according to Lapointe.

The man did not have any weapons on him and did not appear to have criminal intentions, Lapointe said. The man likely suffers from mental illness and won't face any criminal charges, Lapointe added.

Lapointe did not describe the credentials used to enter the stadium, but the man had to pass through three security layers to get close to Biden.