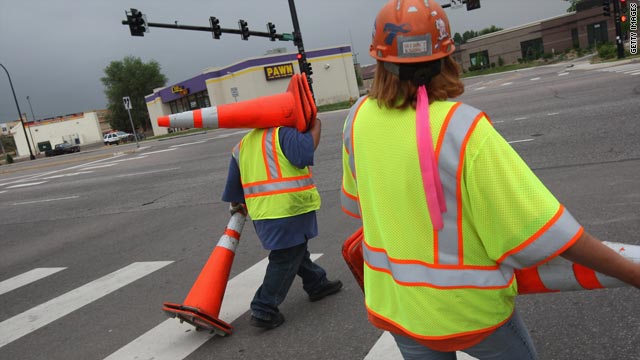 Washington (CNN) -- As members of the Obama administration on Wednesday tout stimulus successes across the country, they won't be highlighting its other effects -- the death of bipartisanship and the rise of the Tea Party movement.

The $862 billion economic stimulus package "was never intended to save every job," Obama said on Wednesday at the White House marking the anniversary of his signing the bill. "Businesses are the true engine of growth (and) always will be. But during a recession ... what government can do is provide a temporary boost."

Several of the president's Cabinet members were to spread a similar message across several states -- some of them battlegrounds in upcoming midterm elections -- to highlight projects they tout as successes.

The program, formally known as the American Recovery and Reinvestment Act of 2009, was implemented to stimulate the country's staggering economy by increasing federal spending and cutting taxes.

But after riding into the White House on a message of changing the way Washington did business, getting the bill passed pushed Democrats and Republicans into warring camps that they haven't emerged from since -- no Republicans in the House voted for the bill and only three in the Senate did.

House Minority Leader John Boehner on Tuesday tried to throw cold water on the administration's stimulus events: "Self-congratulatory 'stimulus' spin from this administration is hopelessly out of touch with reality and has about as much credibility as prior claims that unemployment wouldn't exceed eight percent or that jobs would be created 'immediately,'" he said in a press release Tuesday.

"The dismal performance of the 'stimulus' demonstrates the dangers of allowing Washington to take more control over our economy," he added.

Republican Whip Rep. Eric Cantor of Virginia said states have lost a total of 2.9 million jobs between the bill's enactment last February through December, though the administration projected stimulus would save or create 3.5 million positions.

Rep. Ron Paul of Texas, a 2008 Republican presidential candidate, has been a vocal critic of the stimulus, saying the economy is still "mired in mediocrity" a year since the bill passed.

"The problems with stimulus packages are manifold. The primary reason they fail is because they do not address the roots of the problem," Paul wrote in a CNN.com commentary. "If you are unable to identify the cause of your problem, then your solution is doomed to fail."

Citizens Against Public Waste, a nonpartisan advocacy group, has railed against the stimulus bill ever since it was put into place. It had urged lawmakers at the time to oppose the "fundamentally flawed" bill.

"House and Senate leaders have orchestrated an hysteria-driven hyperpartisan spending circus whose real goal has become permanent growth in federal government spending and debt liabilities that will rob future generations of income and prosperity," according to a press release at the time.

And outrage against the stimulus, and bailouts of Wall Street financial firms and automakers, helped spawn the Tea Party movement and a rising anti-incumbent atmosphere that threaten Democratic control of Congress.

Democrats and the administration, meanwhile, have pointed out its successes since the bill was signed, highlighting key projects throughout the country.

In his State of the Union Address, Obama touted a success story from the stimulus, citing a new report by the American Wind Energy Association. White House press secretary Robert Gibbs said stimulus funds turned what had been a projected decline in new wind electricity generation in 2009 to a sharp increase.

On its Web site, the Democratic National Committee says of the stimulus anniversary that it's "doing exactly what it was intended to do" and said that Republicans are "willing to play politics with our economic security even when our economy was at the brink of collapse, preferring to see the president fail than to see the economy succeed."

Several Republican governors tried to refuse stimulus funds at the time, including former Alaska Gov. Sarah Palin and South Carolina Gov. Mark Sanford, but later had to accept the money after their state legislatures voted to approve the stimulus funding.

There has been a lot of controversy over just how many jobs the projects have created, despite those positive claims coming from the White House.

In total, the economic stimulus program has boosted employment by 1.5 million to 2 million jobs, the president's chief economic adviser said in mid-January. That number is derived from a mathematical formula based on how much money has flowed out the federal door.

Mike Pickett, CEO of Onvia, a Seattle, Washington, firm that advises clients who may be looking to bid on contract work and tracks government contract spending, told CNN the stimulus so far is a mixed bag.

Picket estimated "roughly $68 billion have actually reached contractors and subcontractors. We estimate that has delivered... or saved about 500,000 jobs."

"It looks like the majority of the remaining funds -- some $200 billion -- will leave Washington and reach contractors this year. And that should increase the jobs created or saved number to around 1.6 million. And I think that's where it'll cap."

Phil Gordon, the Democratic mayor of Phoenix, Arizona, has pointed out that the stimulus funds were vital for his city and the state as a whole.

"The debate of whether or not the stimulus has in fact 'stimulated' our economy will continue for months, and possibly years to come," he wrote in a CNN.com commentary. "But the picture in Phoenix, Arizona, is clear: Because of ARRA, key projects are under way, our environment is improving and thousands of people are going back to work."

The American public, however, is overwhelmingly weary about the stimulus' success.

Nearly three out of four Americans think that at least half of the money spent in the federal stimulus plan has been wasted, according to a CNN/Opinion Research Corporation survey released in late January.

The poll also indicated that 63 percent of the public thinks that projects in the plan were included for purely political reasons and will have no economic benefit, with 36 percent saying those projects will benefit the economy.

While Republicans have been in near lockstep against the stimulus plan, top Democratic officials have called many of them out for promoting stimulus-funded projects in their districts.

"I think the Republican members who are seeking these funds know it's working... we're going to point that out," said DNC Chairman Tim Kaine on a conference call with reporters Tuesday.

Obama himself has called out Republicans, saying in a February 2 town hall meeting in New Hampshire: "Some of the very same folks in Congress who opposed the Recovery Act -- and claim that it hasn't worked -- have been all too happy to claim credit for Recovery Act projects and the jobs those projects have produced. They found a way to have their cake and vote against it, too."

NBC's Rachel Maddow took one Republican to task for opposing Democratic spending while touting funds coming into his district.

Appearing on NBC's "Meet the Press" on Sunday, Rep. Aaron Schock, R-Illinois, was challenged by Maddow about voting against the omnibus spending bill at the end of last year but appearing at a community college in his district last week to tout a $350,000 green technology education program funded by the bill.

"You voted against the bill that created that grant. And so that's happening a lot with Republicans sort of taking credit for things that Democratic bills do, and then Republicans simultaneously touting their votes against them and trashing them," Maddow said.

Schock shot back that these arguments are "absolutely ridiculous."

On Wednesday, Schock spokesman David Natonsky told CNN that Schock voted against the omnibus bill "because it was too much spending and too much debt for too little economic benefit."

"Unfortunately, we lost that fight and this federal money is going to be spent," Natonsky added. "As Illinois taxpayers will end up footing part of this bill, they have every right to apply for these funds."

The DNC points to at least 65 Republicans who have done the same with stimulus money.

"So, how will these Recovery Act hypocrites celebrate tomorrow? Will they finally put aside their partisan games and faux opposition to the Recovery Act Or, will they continue to denounce its successes in Washington while claiming credit for them at home?" the DNC noted of the stimulus plan's anniversary.

In addition, the nonpartisan Politifact.com checked into the hypocrisy claims and found many cases:

• Rep. Geoff Davis, R-Kentucky, voted against the bill, saying it was full of pork. But in December of 2009, he sent out a press release announcing that a $1 million grant would be given to the Carroll County School District.

"As it happened, on the very same day, Davis sent out a separate release in which he referred to the "failed trillion-dollar 'stimulus' bill," according to Politifact.

• Rep. Phil Gingrey of Georgia said his no vote was due to concern over government spending and the rising debt. But in October, he was photographed in a newspaper in Cedartown, Georgia, giving a ceremonial check for $625,000 in stimulus funds to local leaders, which the newspaper noted would go for new sidewalks, landscaping and other city projects.

Politifact noted that Gingrey spokeswoman told the newspaper that because the project qualified for federal stimulus funds as "shovel-ready," Gingrey "presented the proposal at the federal level."