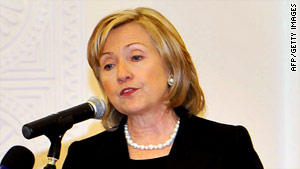 At the meeting in Riyadh, Saudi Arabia, Saudi Foreign Minister Saud al-Faisal called on Iran "to respond to efforts to remove regional and international suspicions toward its nuclear program" and stressed his country's desire for a region "free of weapons of mass destruction, most notably nuclear weapons."

Clinton called Iran's recent announcement that it will start to produce higher-grade enriched uranium, "a provocative move in defiance of United Nations Security Council resolutions" and warned that the "increasingly disturbing and destabilizing actions" by Iran "will result in increasing isolation."

"We see that the government of Iran, the supreme leader, the president, the parliament, is being supplanted, and that Iran is moving toward a military dictatorship. Now, that is our view."

The tough comments on Iran came during Clinton's four-day trip to the Middle East.

A day earlier, Clinton called for stronger actions against Iran in the wake of its announcement that it is stepping up production of highly enriched uranium.

"Iran leaves the international community little choice but to impose greater costs for its provocative steps," she said. "Together, we are encouraging Iran to reconsider its dangerous policy decisions."

The five permanent members of the U.N. Security Council -- the United States, Britain, Russia, China and France, all of which have veto power -- have been engaged along with Germany in discussions about possible further sanctions.

While Clinton was in Qatar, Adm. Michael Mullen, chairman of the Joint Chiefs of Staff, arrived in Israel Sunday evening to meet with that nation's top military officials, including Minister of Defense Ehud Barak.

"Right now, diplomatic efforts continue," Mullen said, according to the Israel Defense Forces Web site. "The option to attack Iran is still on the table, but we're not there yet."

Iranian President Mahmoud Ahmadinejad has said Israel "must be wiped off the map" politically. The United States has had to assure Israel that its interests will be protected to keep its military on the sidelines.

"Conflict with Iran would be a big problem for everyone," Mullen said. "I worry about the unintended consequences of an attack. While every situation has limits, we're not there yet. The diplomatic efforts must be exhausted until the end."

Iran said last week that it had completed its first batch of 20 percent enriched uranium and will soon triple production.

Asked about comments made Monday by the director of Iran's Atomic Energy Organization, Ali Akbar Salehi, to the semiofficial Fars News Agency that Iran would be prepared to stop its 20 percent enrichment, Crowley encouraged Iran to bring its ideas to the table.

Iran has also refused recent diplomatic efforts to reach a resolution, she said.