'Tenther' movement aims to put power back in states' hands 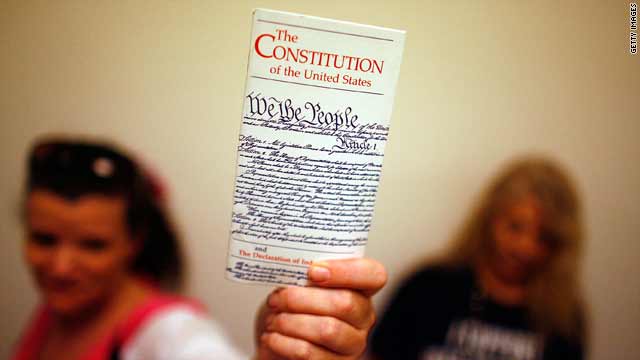 States rights activists use the Constitution's Tenth Amendment to support their cause.
STORY HIGHLIGHTS
RELATED TOPICS

Washington (CNN) -- Their message is loud and clear: Big government is out of control; states need to take back their constitutional rights.

A movement has been growing over the past two years of urging states to exert their rights under the 10th Amendment. The Amendment, part of the Bill of Rights, states: "The powers not delegated to the United States by the Constitution, nor prohibited by it to the States, are reserved to the States respectively, or to the people."

A number of states have passed resolutions that assert their rights. While the resolutions have no legal teeth, they're intended to carry a message: States' rights are being trampled on.

The anger behind the so-called 'Tenther' movement comes from what advocates see as the federal government's forcing policies on the states -- most notably on health care reform, economic recovery measures and social issues.

But critics of the movement say the resolutions go too far by nullifying or ignoring federal laws.

After the Georgia Senate's move in April 2009 for sovereignty, Atlanta Journal-Constitution columnist Jay Bookman wrote that this push has a "particularly nasty legacy."

"It helped precipitate the Civil War, and in the 1950s and early '60s it was cited by Southern states claiming the right to ignore Supreme Court rulings ordering the end of segregation," he wrote.

Bookman added: "You have to question the judgment of those who would have any truck whatsoever with such nonsense and who would jeopardize the reputation of the Georgia Senate to lend aid and comfort to such radical causes and fringe groups."

Other critics point out that if states want to send a clear message to Washington -- and not just pass resolutions -- they would refuse federal money or other services.

Michael Boldin, the founder of the Tenth Amendment Center, said the amendment is simply a reinforcement that the people created the federal government -- and the "people are in charge."

His organization helps provide information to grass-roots groups looking to strengthen the sovereignty of states. Boldin pointed to several states laws that have been passed -- such as medical marijuana and same-sex marriage -- as examples why states should be able to decide their own fate.

"These really important issues ... were supposed to be left close to home," he said. "That way you can have a huge country with all kinds of viewpoints living in peace because you don't have people battling each other for the federal prize."

Steven Schwinn -- a law professor at John Marshall Law School and Constitution expert -- says that the amendment is too vague to be used as an argument for state sovereignty on key issues such as economic recovery, marijuana laws and same-sex marriage.

"To say that the 10th Amendment somehow empowers states or gives them state sovereignty is just reading way too much into the text," he said. "The 10th Amendment just can't bear that weight."

But don't tell that to the 37 state legislatures that introduced sovereignty measures in 2009. According to the Tenth Amendment Center, seven state legislatures -- Alaska, Idaho, Louisiana, North Dakota, Oklahoma, South Dakota and Tennessee -- have passed such legislation.

All the resolutions, Schwinn noted, are nonbinding and do not carry any legal muscle.

Tennessee and Alaska, in particular, went a step further: The governors in each state, including Sarah Palin of Alaska, signed their respective legislatures' resolutions.

The one-time Republican vice presidential candidate has been a vocal critic of President Obama's economic stimulus plan and tried to reject parts of the money allocated for her state that she deemed unnecessary.

Roy Moore -- a former chief justice of the Alabama Supreme Court who was removed from office for refusing a federal judge's order to remove a Ten Commandments monument -- commended Alabama's decision.

"I am certainly pleased that the Alabama Legislature has passed a resolution affirming the sovereignty of our state under the Tenth Amendment to the United States Constitution," he wrote. "Alabama now joins many other states which have passed such resolutions as a principled response to unprecedented threats to our liberties by the bloated and ever-expanding federal government."

In early February, South Carolina's House voted overwhelmingly in favor of a state Senate resolution on sovereignty. It now returns to the Senate for action.

Boldin says many pushing for state sovereignty use history as their guide, remembering the run-up to the Civil War when states were seceding from the union -- or when American colonists were "throwing off the chains of the [British] tyrant" during the American Revolution.

"That tends to ring very strongly in peoples' hearts and minds when they think of this. I think it's really important to understand history ... but I wouldn't rely on it completely."

Boldin -- who started the center in opposition to the Bush administration's enactment of the Patriot Act and other wartime measures -- said the movement is symbolic.

"If you own an apartment in a building and your tenant hasn't paid rent for a while, you basically have to serve notice," he said. "And it's basically that first step to serve notice to the federal government that they have to follow the Constitution or there'll be follow up."

The U.S. Supreme Court several times has deemed the 10th Amendment as a truism that simply states "what we all understand to be the relationship between the federal government and the states," Schwinn said.

"The Supreme Court has kind of ebbed and flowed on its interpretation of the 10th Amendment, but the 'truism' reading of the amendment strikes me as the one that's closest to correct."

And some lawmakers are also questioning the need for using the 10th Amendment in passing legislation.

Last week, the Kansas Senate Judiciary Committee recommended for approval a nonbinding resolution that says the federal government has violated the 10th Amendment. The resolution -- was approved 10-1 by the committee.

The one holdout -- Sen. David Haley, a Democrat from Kansas City -- told the Lawrence Journal-World newspaper that while he at times disagrees with the federal government, the push didn't necessarily warrant a sovereignty resolution.

Nonetheless, there is growing support by national political candidates looking to tap into voters' anger over big government. Opposition to legislation such as the American Recovery and Reinvestment Act and health care reform are touchstones of the populist Tea Party movement, for instance.

Minnesota Gov. Tim Pawlenty urged other governors in September 2009 to counter what he deemed the growing power of the federal government as the health care debate was heating up. Pawlenty, considered to be a GOP 2010 presidential contender, backtracked a bit on his push while speaking on a radio show in Minneapolis, Minnesota, saying the 10th Amendment push should be used for debate and awareness of the issue.

One case that drew widespread attention was when Gov. Rick Perry, a Republican, hinted in a 2009 interview that Texas could secede from the union if health care reform were pushed on his state, though he later backed away from the comments.

"The whole point of the Constitution is to bring states together in a union," said Schwinn, the John Marshall Law School professor. "So secession is not a constitutional option."