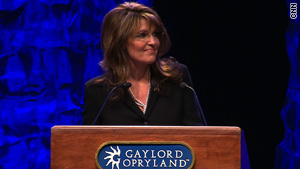 In an interview broadcast on "FOX News Sunday," Palin said she would consider a run for president in 2012.
STORY HIGHLIGHTS

(CNN) -- Former Alaska Gov. Sarah Palin says she would consider a run for president in 2012 if the situation was right for her family and the nation.

In an interview recorded Saturday and broadcast on "FOX News Sunday," Palin said she would run "if I believed that that is the right thing to do for our country and for the Palin family."

"I think that it would be absurd to not consider what it is that I can potentially do to help our country," Palin said, later adding: "I won't close the door that perhaps could be open for me in the future."

The interview was recorded before her keynote address Saturday night at what was billed the first national Tea Party convention. Palin, who had little national profile before running unsuccessfully for vice president on Sen. John McCain's Republican ticket in 2008, remains a leading GOP draw and an unofficial symbol of the Tea Party movement of conservative discontent with government.

The convention, which concluded with a dinner and Palin speech that cost more than $500 per ticket, was intended to begin transforming the Tea Party movement into a political force capable of influencing elections, organizers said.

"It's so inspiring to see real people -- not politicos, inside-the-beltway professionals -- come out, stand up and speak out for common sense conservative principles," Palin said in her speech to a crowd that gave her repeated standing ovations.

Calling the Tea Party movement a "ground-up call to action that is forcing both parties to change the way they're doing business," Palin said "America is ready for another revolution and you are a part of this."

In the interview with Fox, Palin said she believed President Obama would lose a re-election bid in 2012 if he fails to change the policies followed so far in just over a year in office.

If Obama "continues on the path that he has America on today," Palin said, "he's not going to win."

"That's what a lot of Americans are telling him today, and he's not listening,"

"Instead, he's telling everybody else, 'Listen up and I'll tell you the way it is.' Well, we have a representative form of government in our democracy. And we want him and we want Congress to listen to what the things are that we are saying."

In her speech, Palin cited the upset victory by Republican Scott Brown in the Massachusetts special election to fill the U.S. Senate seat formerly held by liberal Democrat Ted Kennedy as evidence of the popular discontent over Obama's policies.

What's your take on Palin's speech? Put your thoughts on video

"The Obama/Pelosi/Reid agenda will leave us less secure, more in debt and under the thumb of big government," Palin said in reference to House Speaker Nancy Pelosi and Senate Majority Leader Harry Reid.

Asked if Palin should make a bid for the White House, Silleman said, "I would like to see her in a higher office but I don't know that she'll do it. I wouldn't want her to be hurt that bad."

"She has fervent heart and she's conservative," said the 59-year-old Brown, who owns a small business in North Carolina. "She was the only one truly qualified with executive experience of the four who ran in 2008. The others were glorified lobbyists."

But Palin's experience has frequently been called into question, most recently in a book that chronicles the 2008 campaign. "Game Change" by Mark Halperin and John Heilemann largely portrays the then-vice presidential candidate as wholly unprepared for the national stage and poorly versed in a range of pressing issues.

In the Fox interview, Palin said she receives daily e-mails from experts on topical issues that have helped her become "more astute" than she was during the 2008 election campaign.