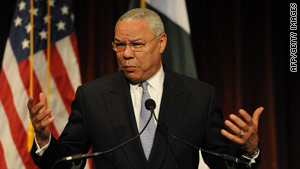 Colin Powell says he supports a new policy presented by the secretary of defense and the current Joint Chiefs chairman.
STORY HIGHLIGHTS

Washington (CNN) -- Colin Powell, the former chairman of the Joint Chiefs of Staff and former secretary of state, has come out in favor of eventually repealing the military's "don't ask, don't tell" policy on gay and lesbian service members.

"In the almost seventeen years since the 'don't ask, don't tell' legislation was passed, attitudes and circumstances have changed," Powell said in a statement released by his office Wednesday.

Powell added that he believes the ultimate decision about the policy should be made by President Obama, the nation's commander in chief; the military's top brass; and Congress.

"I fully support the new approach presented to the Senate Armed Services Committee this week by Secretary of Defense Gates and Admiral Mullen, Chairman of the Joint Chiefs of Staff. I will be closely following future hearings, the views of the Service Chiefs and the implementation work being done by the Department of Defense," Powell said.

Appearing before the Senate Armed Services Committee on Tuesday, Gates and Mullen said the military is preparing for a repeal of the policy.

Mullen told senators it is his "personal belief" that "allowing gays and lesbians to serve openly [in the military] would be the right thing to do."

"The question before us is not whether the military prepares to make this change, but how we best prepare for it," Gates told senators Tuesday. "We have received our orders from the commander in chief, and we are moving out accordingly."

The ultimate decision about repealing the policy rests with Capitol Hill. Last week, during his first State of the Union address, Obama called on Congress to repeal "don't ask, don't tell."

"General Powell has made clear that his position is about effectiveness in the military," Human Rights Campaign President Joe Solomonese said.

"His powerful voice for ending 'don't ask, don't tell' is a tipping point in favor of the brave men and women who are serving our nation in silence. The support of respected present and former military leaders brings us closer to repeal, signaling that we're moving forward and will get there soon."

Solomonese asked opponents of the repeal what they know that Powell, Gates and Mullen don't know.

"The truth is that there are no more excuses, the death knell for 'don't ask, don't tell' has been rung and now is the moment to send this law into the history books where it belongs."