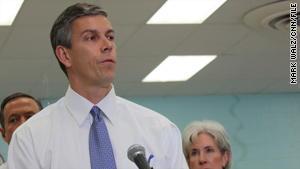 Washington (CNN) -- Education Secretary Arne Duncan has spent the past couple days backpedaling from comments he made Sunday suggesting that Hurricane Katrina was good for New Orleans' failing schools.

But, while he's apologizing for poor word choice, his comments echo a truth spoken by many in New Orleans.

"It was a dumb thing to say, and I apologize," Duncan said Tuesday.

In a Sunday broadcast of TV One's "Washington Watch with Roland Martin," Duncan was asked about the progress New Orleans schools have made since Katrina hit in 2005.

Excerpts of the interview were released by the show Friday. Shortly afterward, numerous networks and newspapers picked them up, sparking the controversy that continued once the remarks were broadcast. Friday evening, Duncan called New Orleans Mayor Ray Nagin to explain what he meant, his office said.

Duncan said Tuesday that he regrets what he said but insisted that the storm motivated the city to reinvest in its children like never before.

"I said it poorly. And my point was very simple. Hurricane Katrina was a devastating, devastating tragedy. The progress we've seen subsequent to that has been absolutely remarkable. The teachers, the principals there are working so incredibly hard," Duncan said.

"Almost all the students missed three months, four months, six months. I talked to students who missed more than a year off school, and yet they came back. And in a short amount of time, four years, they came back, subsequent to the devastating tragedy. Amazing progress. And I just tip my hat to the hard work there. I was simply trying to point out how impressed I am, the remarkable commitment and the sense of urgency."

Several Louisiana officials defended Duncan's remarks. The state's superintendent of education, Paul Pastorek, said, "I know it's a strong statement, but it's actually quite accurate. It was a pathetic system before the storm."

Paul Vallas, superintendent of the Louisiana Recovery School District -- a special program administered by the state with the aim of boosting underperforming schools -- noted that "local people have said that time and time again."

Duncan said in the TV One interview that New Orleans in the past "was not serious about its education" but called the school system's reform since Katrina "unbelievable."

Duncan has made several trips to New Orleans since becoming education secretary one year ago. His most recent was October 15.

Regarding that city, Duncan said, "What this is about was this huge sense of urgency. And folks understood you had to literally build from the ground up. ... I just want to do whatever I can to continue to support the remarkable, remarkable progress."

Education is a priority in the Obama administration, as evidenced by the president's proposed 2011 budget, released Monday, which would increase federal education spending by 7.5 percent, or $4 billion.

But Tuesday, he said, "We talk about the growth of No Child Left Behind, and New Orleans is a prime example. Is it where it needs to be? No. Still, clearly, it's a long journey, a long ways to go. But the progress has been amazing."