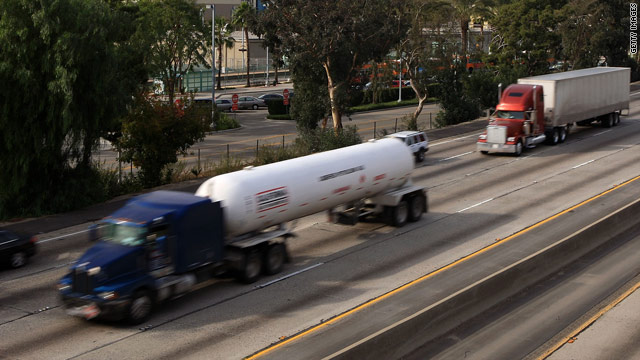 "We want the drivers of big rigs and buses and those who share the roads with them to be safe," LaHood said in a statement. "This is an important safety step, and we will be taking more to eliminate the threat of distracted driving."

The prohibition is effective immediately. Truck and bus drivers who text while driving commercial vehicles may be subject to civil or criminal penalties of up to $2,750, the Department of Transportation said in a news release.

The release did not offer specifics on how the prohibition will be enforced.

One of the nation's largest groups representing professional truck drivers -- the Owner-Operator Independent Drivers Association -- expressed support for the goal but dismay at its implementation.

"We support where they are going, but not how they got there," said Todd Spencer, the group's executive vice president. "Making their action effective immediately bypasses normal regulatory rulemaking processes. Those processes allow actions to be vetted for unintended consequences as well as potential implementation and enforcement problems.

"We very much share in their goal, but their legal justification for taking immediate action raises many concerns."

Cracking down on distracted drivers has been a focus of LaHood's since he took office last year.

In September, he convened a two-day summit on the issue in Washington. The Transportation Department recently launched the Web site distraction.gov to raise awareness of the dangers of distracted driving.

And this month, LaHood and National Safety Council President Janet Froetscher announced the creation of the advocacy group FocusDriven, a nonprofit that supports the families of distracted driving victims, modeled after Mothers Against Drunk Driving.

According to the Federal Motor Carrier Safety Administration, drivers take their eyes off the road for an average of 4.6 seconds out of every six seconds while texting. This research shows drivers who text are more than 20 times more likely to get in an accident than nondistracted drivers.

President Obama also signed an executive order requiring federal employees not to text while driving government-owned vehicles or with government-owned equipment, and were ordered to comply with the move December 30.

Nearly 6,000 people died in 2008 in crashes involving a distracted or inattentive driver, and more than 500,000 were injured, according to the National Highway Traffic Safety Administration.

Eighty percent of crashes are related to driver inattention, according to a Virginia Tech study, and drivers who use handheld devices are four times as likely to get into crashes serious enough to injure themselves, the National Safety Council reports.

The focus on texting while driving comes after a few high-profile accidents.

In September 2008, a California commuter train engineer missed a stop signal while trading text messages with a friend, leading to a collision with a freight train that killed 25 people, according to federal investigators.

A mass-transit accident in Boston, Massachusetts, injured 62 people in May. The operator of a Massachusetts Bay Transportation Authority trolley later was charged with gross negligence after admitting he had been texting seconds before the collision with another trolley, according to the Suffolk County district attorney and a National Transportation Safety Board official.