Democrats step back before deciding how to move forward 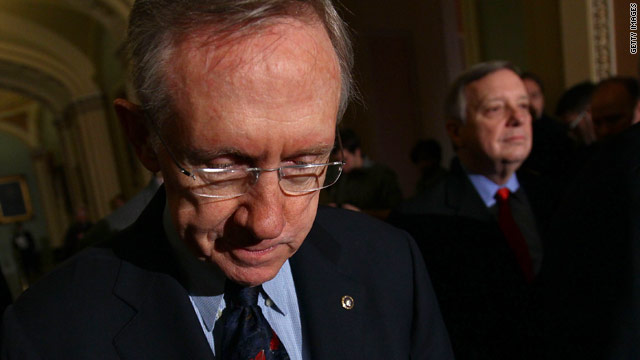 (CNN) -- The message from voters in Massachusetts has Democrats reassessing their next steps as they balance the risks of an election year with an agenda they can no longer push through on their own.

Republican Scott Brown's jaw-dropping victory Tuesday night in the special election to serve out the remainder of the late Sen. Ted Kennedy's term stripped Democrats of their 60-seat majority in the Senate.

Capitalizing on voter anger, Brown, a little-known state senator, campaigned as the people's candidate and vowed to vote against the health care legislation. Brown overcame what was once a 30-point deficit to beat state Attorney General Martha Coakley, the Democratic candidate.

Political observers accused Coakley of running a lackluster campaign and not fighting hard enough to get voters' support. One top adviser to President Obama said, "Campaigns and candidates matter."

But White House press secretary Robert Gibbs said Wednesday a lot of people are to blame for Coakley's loss, including the White House.

Video: How will Democrats react now?

With midterm elections on the horizon, some Democrats see Tuesday's Massachusetts race as a warning sign that their jobs are on the line and that voters aren't happy with how health care is being handled.

"If there's anybody in this building that doesn't tell you they're more worried about elections today, you should absolutely slap them," Sen. Claire McCaskill, D-Missouri, said Wednesday.

Brown successfully tapped into what observers said is a wave of disenchantment with Washington, winning over the independent voters who decided the race. Republican strategist Doug Heye said that wave extends far beyond the borders of Massachusetts.

"There's no state in the union right now that Republicans don't feel that they can be competitive in. And if you're a Democrat who's vulnerable ... this really sent a strong signal that your re-election is vulnerable," Heye said.

"I think the president would tell you it's an important moment for us to come together and work on our problems," he said.

With Democrats more cautious about their votes and without a filibuster-proof majority, analysts said parts of Obama's agenda might be sidetracked.

So far, the health care bill has moved through the Senate with no support from Republicans. With a blessing from Obama, Democratic leaders decided to forgo a formal conference committee to merge the House and Senate bill, two congressional Democratic leadership sources said, effectively shutting Republicans out from negotiations.

Now, the Senate will need a least some Republican support to deliver a final bill to Obama, who has made the issue his top domestic priority.

In the wake of the election upset, Democrats are debating several options as they try to salvage their health care plans.

"I think we're probably seeing the obituary written tonight for universal access on health care, and it's been a dream of Democrats now for 70-plus years," said David Gergen, a political analyst and CNN contributor.

"I think this vote is going to be a vote heard around the world because it's going to have enormous implications. I think health care is very unlikely to pass in its current form. Cap and trade on energy environment ... it's extremely difficult to get that done in this Congress. Immigration reform, I think, is probably dead this year. Regulatory reform is going to be very watered down," he said.

"He could come back to jobs and the economy and perhaps get some things done, but a lot depends on how they interpret this at the White House," Gergen added.

"He didn't do it just because it was a hobby," Gibbs said. "It was a priority then. It's a priority now. We are working through the best way forward as the president continues his commitment to get health care reform done."

Going ahead, Democrats need to learn the lesson of the election, Democratic strategist Julian Esptein said.

"Democrats need to go beyond the echo chamber of just saying it's an anti-incumbency wave and realize we're in an environment now that is very, very difficult. They should look at some of the lessons from the Clinton years and from the [Lyndon Johnson] years in terms of how to navigate through this next year," he said, noting that Democrats need to be able simultaneously to govern from the left and the center.

If Democrats fail to get at the root of the problem, they will be handing Republicans an opportunity for a major political comeback by riding in on the same theme that Ronald Reagan used in 1980: Big government is not the answer, it's the problem, Epstein added.

Ed Rollins, a Republican strategist who was the national campaign director for Reagan in 1984, said the results of the Massachusetts election gives his party a chance to recruit better candidates.

"There's still several Senate races that we think we've got real shots at, but we don't have the best candidates there yet, and I think that's what this does -- it helps us raise resources. It basically helps us get ready for this thing. You win these things one at a time, and I think we are on a path now that we can do that," Rollins said.