Why George W. Bush must be smiling 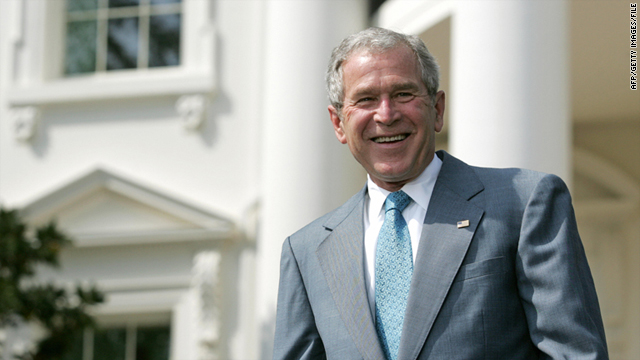 Then-President George W. Bush laughs during an event on the South Lawn of the White House on April 24, 2008.
STORY HIGHLIGHTS

Princeton, New Jersey (CNN) -- Somewhere in Texas, former President George W. Bush must be smiling. When President Obama and the Republican leadership reached a deal on extending all of the Bush tax cuts, including a generous exemption for estate taxes, the current president ratified a key policy from the former administration.

While Obama ran as the candidate who would fight to overturn Bush's record, a huge number of his policies remain in place.

This says a lot about President Bush. One of the key measures that we have to evaluate the success of a president is not simply how many of his proposals pass through Congress but also how many of his policies outlast his time in office. Many of Franklin D. Roosevelt's programs, including Social Security and the Wagner Act, survive into our time.

Though Harry Truman ended his term with his approval ratings in the tank, most of his key national security programs would define America's Cold War policies through the fall of the Soviet Union decades later. Lyndon Johnson pushed a host of policies such as Medicare and federal aid to education that survived the conservative revolution.

Thus far, President Bush has been doing well on that score.

Most of his counterterrorism policies have survived. Although Obama has begun to draw down the troops in Iraq, he has acknowledged that a substantial number will remain in place, and he has expanded the war in Afghanistan. Until the disastrous Gulf Oil spill, the administration supported expanded offshore drilling and did little to fix the regulatory bodies responsible for monitoring these operations.

Congress is deliberating an extension of President Bush's biggest domestic policy of across-the-board tax reductions. President Bush pushed through Congress a massive tax cut in 2001, and another in 2003, both of which severely undercut the fiscal strength of the Treasury.

The tax cuts of 2001 and 2003 provided relief for middle- and upper-income Americas with much of the benefits going toward wealthier citizens, which they argued would accelerate economic growth. The tax cuts reduced rates cross the board on income, dividends and capital gains. They also slashed the estate tax while lowering the tax obligations of married and working poor Americans.

Even though the nation was at war, Republican Rep. Tom DeLay said, "nothing is more important in the face of war than cutting taxes" -- a far cry from the themes of sacrifice that shaped World War I and World War II.

As the historian James Patterson wrote, "Well before George W. Bush left office in 2009, he had succeeded in securing major cuts in federal taxes that contributed over time to mounting deficits and rising income inequality. This dramatic turn in fiscal policy was the most significant domestic legacy of his presidency."

The tax cuts grew out of the supply-side tradition that has been central to conservatism since the 1980s. From the time of his campaign in 2000, Bush enthusiastically embraced supply-side economics, based on the argument that the wealthy would invest the money from their tax cuts into the economy.

"The crucial question in a capitalist country," wrote George Gilder, a leading voice of supply-side economics, in 1981, "is the quality and quantity of investment by the rich."

Conservatives also pushed for massive tax cuts based on the belief that it would make it difficult for liberals to build new programs and open up existing programs to attack under the guise of deficit reduction.

In 1978, while testifying to the Senate Finance Committee, the economist Alan Greenspan said, "Let us remember that the basic purpose of any tax cut program in today's environment is to reduce the momentum of expenditure growth by restraining the amount of revenue available ..." Or as George W. Bush liked to say, "I've learned that if you leave cookies out on a plate, they always get eaten."

Democrats railed against Bush's tax cuts. They became symbols of the policies of the era that, in their minds, worsened inequality. The tax cuts, Democrats said, were also hugely damaging to the fiscal strength of the federal government since they fueled large deficits.

Barack Obama made his attacks on the tax cuts a pillar of his campaign in 2008 and continued to oppose extending the reductions for the wealthiest Americans. As late as September 2010, the president attacked Minority Leader John Boehner during a speech in the Republican's home state of Ohio by criticizing Republicans for supporting the "same philosophy that led to this mess in the first place: cut more taxes for millionaires and cut more rules for corporations."

But in the end, Obama reversed himself, and he did so in dramatic fashion. House Democrats were caught off guard as the negotiations excluded the Democratic Caucus. Obama justified his decision by telling his supporters that he had no choice.

Since he was going to lose anyway on extending the tax cuts, he said that he should just accept this outcome and get the best deal possible, which included an extension of unemployment benefits.

Now that the tax cuts have received bipartisan support from the leader of the Democratic Party, they would be doubly difficult to eliminate in two years when the debate occurs once again.

Even though Obama did gain provisions to stimulate the economy, the cuts for the wealthy, in addition to the middle class, will continue to place a fiscal strait-jacket around government intervention. They will also increase the size of the deficit and give Republicans even more fodder after 2010 to pressure the administration to make spending cuts and to characterize Obama as a big-spending liberal.

The political victory is not simply one for Republicans but also for former President Bush, whose policies continue to demonstrate their strength and durability.

A president once dismissed as a lightweight, as an accidental president, clearly left his imprint on Washington. The Democrat who replaced him, a politician who won amidst the anger and frustration with Bush, has ended up accepting many of the policies his Republican predecessor put into place.