In defense of Sarah Palin's English 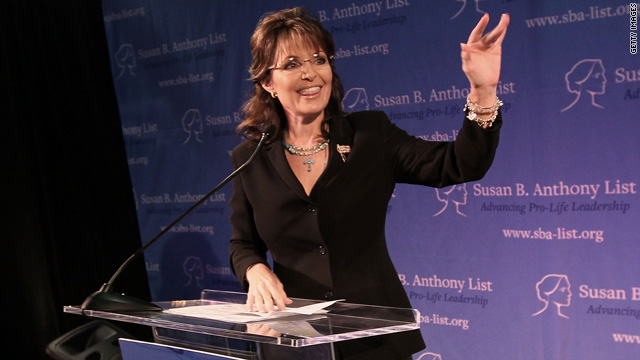 Former Gov. Sarah Palin waves to a crowd gathered to hear her speak on May 14 in Washington, DC.
STORY HIGHLIGHTS

Editor's note: Roy Peter Clark is vice president and senior scholar of the Poynter Institute and founding director of the National Writer's Workshops. He has taught writing for more than 30 years and has spoken about the writer's craft widely. He is the author of the forthcoming book, "The Glamor of Grammar."

(CNN) -- I don't care much for Sarah Palin's politics, but I do like her word "refudiate." As I just typed the word, a squiggly red line appeared under it with a suggestion that I change the word to repudiate. Well, for the record, I repudiate that suggestion and refudiate it.

People who don't like political figures often make fun of their language.

H.L. Mencken said of a Warren G. Harding speech: "It is rumble and bumble. It is flap and doodle. It is balder and dash." Jimmy Carter's enemies portrayed him as a hick from the sticks, not just because of his brother Billy, but for his Southern speech, including his pronunciation of nuclear.

It doesn't seem to matter whether you have a reputation as brainy and articulate.

John Kennedy's Harvard dialect created a cottage industry of comic impressionists. At the other end of the spectrum was George W. Bush, whose Bushisms were legion. Opponents of President Obama attack his use of language as elitist, professorial or passionless.

In other words, Palin stands in good company. And I stand with her.

What was her crime? She made up a new word --unintentionally perhaps, but it doesn't matter.

I once referred to a highly paid athlete as a godzillionaire. I meant to say gazillionaire, but when I caught myself, I realized my "mistake" was better: the athlete's wealth was ginormous, as big and monstrous as the Japanese icon Godzilla.

I'm all for coining neologisms, the technical name for a new word minted into the English language.

One type of neologism is called a blend, as when two words are joined to form a third.

The words web and log gave birth to blog. The merger of gigantic and enormous gave us the increasingly popular ginormous, which I thought was a kid's malapropism until I read it on a billboard.

There's a chance that Palin, who compared her language creativity to Shakespeare's, may in fact be more in tune with Mrs. Malaprop, a famous theatrical character who appeared in Richard Sheridan's 1775 play "The Rivals."

The great lady would lend her name to the confusion of language, as when she meant to say pinnacle but referred to another character as "the very pineapple of politeness."

I knew a burned-out teacher who would collect and publish his student's mistakes, such as a passage in which a young woman was said to "tilt her head with a delicate air of expectoration." Ptooey!

Children's mistakes are often among the most creative. My niece Mary Hope electrified her family by referring to something as an obstacle illusion.

This seemed amusing but useless until the recent day when I thought I saw an orange cone blocking my exit from a casino parking garage. Well guess what? Turned out to be an obstacle illusion.

Lewis Carroll made great use of blends in poems such as "Jabberwocky," in which slimy and lithe collide to form slithy. A Canadian radio word contest invited listeners to coin a word for that straining sound a Canadian car makes on a frigid morning? The winner was a blend: cranksinatra.

The most popular guess is that refudiate was an unintended blend of refute and repudiate.

I like the fact that the sound "feud" rests in the middle because that seems to define Palin's form of maverickism: feudish.

And let's not forget the verb refuse, meaning to reject. There may even be a historical allusion here (perhaps an obstacle allusion) to Refuseniks, those disgruntled Soviet citizens not permitted to emigrate.

Perhaps another influence is radiate. Maybe if you radiate refusal, perhaps can be said to refudiate. It's all good.

I'm for more fun and more color in political speech, including the occasional swing and miss that turns into a home run. The alternative is all script and spin, all euphemism and disclaimer, all flap and doodle, signifying nothing.

The opinions expressed in this commentary are solely those of Roy Peter Clark.