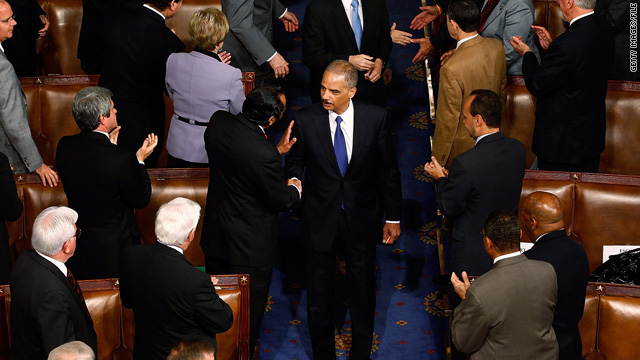 Attorney General Eric Holder, who will likely sue over Arizona law, is greeted by members of Congress May 20.
STORY HIGHLIGHTS
RELATED TOPICS

Editor's note: Ruben Navarrette Jr. is a nationally syndicated columnist and a regular contributor to CNN.com.

San Diego, California (CNN) -- During a recent interview with CNN's John King, Arizona Gov. Jan Brewer said that, if the Obama Justice Department winds up suing her state over an immigration law that President Obama has called "misguided" and many constitutional scholars label unconstitutional, she'll go to court.

"I have a pretty good record of winning in court," Brewer said.

We'll see about that, governor -- and sooner than many people thought.

Sources within the administration are telling reporters that this much anticipated legal showdown is about to take place. Attorney General Eric Holder is expected as early as next week to file a lawsuit challenging Senate Bill 1070, which essentially deputizes every local and state enforcement officer in the Grand Canyon state to act as surrogates for the Border Patrol by requiring that they question the citizenship of anyone who they suspect of being an illegal immigrant (read: Latinos).

According to polls, most Arizonans support the law, as do most Americans. But fortunately for opponents, we don't live in a pure democracy. That's where three people stranded in a lifeboat take a vote, and two decide to throw the third overboard. Life in a constitutional republic means we get majority rule but not at the expense of the rights of the minority. That's why we have a Constitution -- to protect the rights of minorities. Majorities generally can protect themselves.

So this could be a long, hard slog for Brewer and the state of Arizona. Good. It should be.

It's one thing to take the easy way out politically and pander to the nativist mob by signing such a bill to get a leg up during a re-election campaign. It's another to step into the legal arena and force a square peg into a round hole by arguing that a state law that usurps federal authority to enforce immigration law doesn't violate Article 1, Section 8 of the Constitution, which enumerates the powers bestowed to Congress. Among them: the authority "to establish an uniform Rule of Naturalization."

According to media reports, that's likely to be the basis of the government's challenge. Although, in a significant development, part of the lawsuit is also expected to raise the issue of racial and ethnic profiling, insisting -- while SB 1070 specifically bans the practice -- its implementation, in the real world of policing, all but ensures it.

I'm glad to hear it. Race and ethnicity should be part of this discussion. After all, given the growing anxiety in Arizona and around the country over changing demographics, it's hard to deny that they were part of the reason that this ghastly law was passed in the first place.

The federal government enforces immigration law. It isn't self-serve. Like it or not, governor, that's the law. What part of "unlawful" don't you and other crusaders against anti-illegal immigration understand? Supporters of Arizona's SB 1070 argue that the federal government isn't doing enough to secure the border and so, that being the case, Arizona can pitch in and lend a hand.

That's interesting. I'm curious, governor. Since the Constitution also gives Congress the power to coin money, does this mean that you believe that -- if Arizonans decided that Ronald Reagan's picture belongs on the $50 bill, and the federal government didn't happen to agree -- these folks could buy lots of paper and green ink and start printing bills?

Wait. That doesn't make much sense. But then neither does the bill you signed into law for the sake of politics and now have to defend in court with barely a leg to stand on.

Speaking recently to a high-level official with the Border Patrol, I asked what he thought of SB 1070. He said he didn't know what to think because he doesn't understand it. This is someone who clearly can't be accused of condoning illegal immigration or supporting an open border. Hello? He's with the Border Patrol! It's just that, as a federal agent who has received many weeks of specialized training that allows him to enforce immigration law without wiping his feet on the Constitution or the rights of U.S. citizens, he has a tough time understanding how clueless state legislators who've spent limited time on the border could think for a moment that the job he does and the job that local police officers do are interchangeable.

Ah, there's the rub. Arizona lawmakers are not thinking. They're too busy pandering. It looks like the Justice Department, and the federal courts, are going to have to do the thinking for everyone.