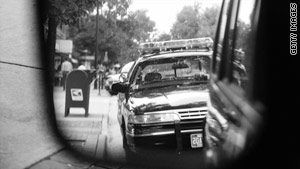 Author decides not to try to talk his way out of a ticket.
STORY HIGHLIGHTS

(RealSimple.com) -- Stealing is a no-no; cheating is bad. When it comes to moral quandaries, the thou shalt-nots are no-brainers.

The truly tough dilemmas are those small, more ambiguous ones that you may stumble upon anytime, anywhere.

One evening last fall I was driving a bit, ahem, faster than the law permits, and soon enough a state trooper was tailing me. Once I was pulled over, I had a quick choice to make: Should I try to talk myself out of the citation (claiming a family emergency, for example), or should I own up to speeding? Since all my excuses would have been lies (and lies, no matter how small, have a way of escalating into a quagmire of deceit), I accepted the ticket.

The ethical decisions we confront daily are toughest when there's a significant downside to making the "correct" choice -- or when it's unclear what that choice is. Here's how to identify the right thing to do; it's up to you to do it.

1. If something at a yard sale is far more valuable than the posted price, do I have to let the seller know?

A piece of furniture you've been searching for is marked $25. You know that similar pieces in worse condition have sold for more than 10 times as much. You're under no obligation to correct the seller on her underpricing. One of the beauties of yard sales is such finds. Savor yours.

Real Simple.com: How to negotiate anything

2. Is it considered stealing to take pens from a bank? What about extra napkins from a fast-food restaurant?

While grabbing a pen isn't necessarily considered stealing, you should just ask the teller if you have any doubts. That said, one pen is OK, but enough to stock your home office isn't (the same goes for napkins). A good rule of thumb: If something feels sneaky, then it probably isn't a good idea.

3. If a charity sends me free address labels and I don't make a contribution, is it OK to use them?

Go right ahead. The labels and the request were unsolicited. Better you should put them to use than toss them in the trash. If it's a cause you believe in and are willing to support, then terrific if you can make a donation as well. But as you affix the labels to your envelopes, you can do so with a clear conscience.

4. Is it unfair to move into better (open) seats at a sporting event or a concert?

There's no harm in seeing if you can move into a better viewing position. But before you do, make sure there's no posted policy against it. And if an usher asks to see your tickets, be prepared to move back to your original seats without argument.

5. My boss gave me credit for a project on which a colleague did most of the work. Should i accept the praise?

Fight the urge to accept the compliment wholeheartedly. It's unfair for your colleague not to get the kudos he deserves. But you don't want to sell yourself too short, either. An appropriate response: "Thanks, but while all of us worked hard, it was Evan who did the bulk of the work on the project."

6. Is it OK to fantasize about someone else when I'm with my partner?

Any couples therapist would say that fantasies are normal, but they can become problematic if they are the only way a person can achieve intimacy with his or her spouse -- or, of course, if they lead to actual infidelity. As long as your George Clooney or Angelina Jolie musings are occasional, enjoy them. (Face it: Your chances with either of them aren't all that great, anyway.)

7. Am I obligated to lend money to friends and family?

One of your oldest friends asks if you can lend her money to make her condo payment. You feel as if you should help her out, since she is a dear friend, but in actuality you have no such duty, particularly if doing so puts your own finances in a squeeze. Decline by saying you are steeped in your own bills. If a family member calls seeking aid, again, there's no requirement. But if he is truly in need and you have the money, concern about his well-being should trump any fears you have about his paying you back. If you do lend money to a family member or friend who has reoccurring financial problems, you should be prepared never to see that cash again.

8. If someone tells an offensive joke, is it my responsibility to speak up about it?

Letting such humor pass without comment not only permits the teller to be offensive to you and other people but also sends the message that you're OK with hearing such bunk. Unless the joke crosses the line into harassment territory, there's no need to beat the person up in response. A simple "I enjoy a good joke now and then, but, you know, yours was pretty offensive" will suffice.

Yes, if it's a quick scan while you're walking by the computer. But if you decide to do anything more invasive, like opening e-mails, then you should have an agreement with your child that from time to time you will be screening her online activity. If your child ever finds out that you have read her e-mail without her consent, then rebuilding trust will prove monumental. (And keep in mind that given how tech-savvy kids are these days, they may have an e-mail account all scrubbed and ready for your discriminating eyes.)

10. My boss asked me to cover for him on his expense report by saying I was at a meal when I wasn't. Should I do it?

Your boss put you in a miserable position. Signing your name to the report makes you just as culpable should the misdeed be discovered. But if you stand up to him, you could find yourself out of a job. Bear in mind that a boss who would put you in such a predicament will probably do it again. I can't condone putting your name on the report, but the choice is yours.

Jeffrey L. Seglin writes "The Right Thing," a weekly ethics column for the New York Times News Service/Syndicate. He is an associate professor at Emerson College, in Boston.