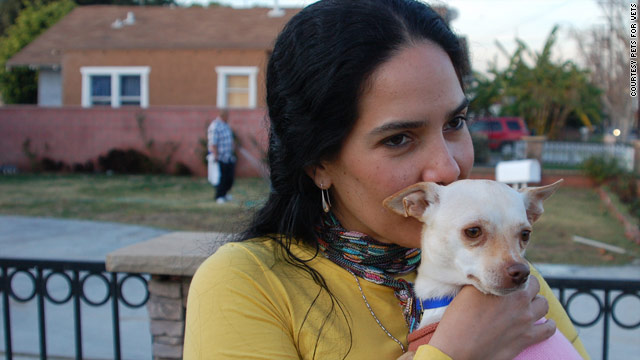 Sgt. Doraliza Velez-Collazo says her Chihuahua, which she got through Pets for Vets, forces her to get out of her home.
STORY HIGHLIGHTS
RELATED TOPICS

(CNN) -- Sgt. Doraliza Velez-Collazo used to sleep with the lights on, haunted by nightmares since suffering a traumatic brain injury in Iraq. Severe depression kept her inside her small rented room in Southern California most days.

But just before the holidays, a 10-pound ball of fur came into her life and quickly began to turn it around.

Lupita, a 3-year-old Chihuahua that had been abandoned at a Los Angeles County shelter, was placed with Velez-Collazo with the help of Pets for Vets, a nonprofit organization.

"I used to not get out of the house at all," said Velez-Collazo, 37, whose 12 years as an Army combat battlefield nurse included deployments to Iraq and Kuwait. "Now I have to take her out. I get out of bed and put on some clothes."

That motivation to participate in normal daily activities is the goal of Pets for Vets, founded in 2008 by 27-year-old animal trainer Clarissa Black. The Los Angeles-based program matches homeless pets that may otherwise be euthanized with veterans suffering from post-traumatic stress disorder, traumatic brain injury and other ailments from their time in a war zone.

"A lot of times, these veterans who are coming home feel abandoned, and they have a difficult time adjusting to civilian life," Black said. "A lot of them tell me that they would just like someone to say thank you. Pets for Vets is that way to say thank you. Both [the veteran and the pet] have been through traumatic events, and together they can help each other heal."

Dave Sharpe, 31, a former senior airman in the U.S. Air Force, heads a similar program in the Washington, D.C., area. Sharpe, who suffers from PTSD, started Pets2Vets after he experienced the healing benefits of his own dog, Cheyenne.

Shortly after he got Cheyenne as a puppy, she witnessed one of his violent outbursts that began after he returned from missions in Saudi Arabia and Pakistan during Operation Enduring Freedom.

"Out of the corner of my eye ... I just saw this pit bull puppy wagging her tail and looking at me like, 'Dad, what are you doing?' " Sharpe recalled.

"I picked her up and took her to my bed, and I just told her everything that I went through, and she just sat there licking the tears off my face, and she didn't say a word.

"Right there, I immediately felt at peace with myself," Sharpe said.

A 2004 Pentagon study found that one in six veterans returning from Iraq and Afghanistan suffer from PTSD, depression or anxiety. A 2008 study by RAND Corp. put the number at nearly 20 percent, or one in five returning war veterans.

Research has shown that companion animals -- dogs in particular -- help lower blood pressure and heart rates in their owners, according to CNN's mental health expert Dr. Charles Raison, an assistant professor of psychiatry and behavioral sciences at Emory University.

"[Dogs] actually have a stress-busting effect," Raison said, adding there is evidence that dogs are useful for many types of people, including senior citizens, mental health patients and prison inmates.

That bond began more than 10,000 years ago, Raison said, calling dogs the first domesticated animal -- even before cows.

"Because of that, there's a great deal of warmth and connection between dogs and humans," he said.

The Veterans Affairs Medical Center in Long Beach, California, recognizes that connection and has referred some of its patients to Pets for Vets.

"If you look at health care, what we tend to do here is being exclusive to fixing a body," said Richard Beam, public affairs officer for VA Long Beach.

"But we don't necessarily consider what it is that makes a person whole. By making them whole, we're not only healing them physically, but we're also looking for what makes them thrive for life, what makes them want to be engaged in part of society."

Beam says that in many cases, the answer to that question is pets.

"We've seen phenomenal changes in patients even with just 15 minutes with a dog," he said.

Black made her first pet-vet match in June and has since made seven other successful placements -- all dogs so far, though she's searching for a cat and a snake for two Pets for Vets hopefuls.

Sharpe's program has brought about the adoptions of seven dogs since it began bringing veterans to local shelters and rescue groups in July.

Both groups are helping a wide range of veterans, from those who served in Vietnam and the Bosnia conflict to 1991's Desert Storm and the recent war on terror.

What makes Black's program unique is her hands-on approach. Interested veterans interview with Black to determine what kind of pet would fit their needs and lifestyles. Once she finds a pet that matches that description, she brings it to her home, where she trains it in basic obedience and socializes it with other animals.

Black also helps dogs get used to the presence of wheelchairs or crutches and teaches them to safely hop into laps. And for vets with brain injuries or PTSD, dogs are taught to recognize the triggers of side effects or panic attacks so they can snuggle or nudge the person during those episodes.

"We find that this kind of training helps ensure that the pet and vet are lifelong companions," Black said. "It's less stress, and it relieves the burden and sets both the dog and vet up for success."

Once the pet is ready, Pets for Vets provides all of the necessary equipment for the new owner -- leashes, collars, food and water bowls, dog crates and so on. Sharpe's Pets2Vets offers a similar service.

The goal, Black and Sharpe say, is to provide a permanent home and a second chance for four-legged friends and veterans alike.

"I really do believe that companion animals are the life-saving therapy many veterans need," Black said.

Black, who is hoping to expand Pets for Vets beyond the Los Angeles area, says she sees immediate results from the program.

"[The veterans] visibly relax and appear less anxious," she said of those first meetings between pet and veteran

Sharpe agrees, saying veterans who come into a local shelter for the first time are closed off from those around them, but quickly open up in the presence of a dog.

The results are even more noticeable once the pairs have spent some significant time together at home, Black says.

"[The veterans] are happier and more comfortable in their day-to-day lives," she said. "They don't mention as many readjustment annoyances or concerns [and] are able to focus on the care and joy of their dogs rather than on the negative things in their lives."

A month after Lupita came into Velez-Collazo's life, she's starting to turn her lights off at night.

"I kind of hold on to her little paw, listening to her breathing, and she looks at me, licking my hand, like, 'You're going to be OK, Mom.' "