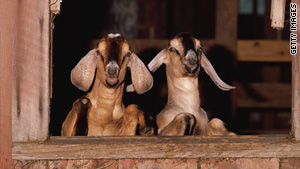 One ex-husband really found a way to get his wife's goat.
STORY HIGHLIGHTS

(Mental Floss) -- Divorce is almost always a messy business, but certain settlements between former beloveds can be somewhat absurd. Here's a look at some examples of offbeat divorce settlements.

Marvin Gaye was a tremendous singer, but he wasn't always so great at keeping track of his personal finances. He spent lavishly, which meant that he often couldn't cover his bills.

He was having particularly big trouble footing the bill for his 1977 divorce from Anna Gordy, so Gaye's lawyer worked out a novel settlement: Gaye would record a new album and give all of the royalties to Gordy as alimony.

Gaye headed into the studio and recorded the double album "Here, My Dear" to fulfill this deal with Gordy. Unfortunately for Gordy, critics and audiences didn't love Gaye's divorce-themed concept album; although today's critics praise the album, it was the singer's worst charting record of the 1970s.

2. Don't hassle his attorney, either

As part of actor David Hasselhoff's 2008 divorce settlement with ex-wife Pamela Bach, he got to keep total possession of the nickname "Hoff" and the catchphrase "Don't Hassle the Hoff."

3. If only divorce lawyers had their own Nobel

Nobel laureates may be some of the world's smartest people, but even they can bungle their divorce settlements. Take Robert Lucas, the 1995 winner of the economics prize. As part of his 1988 divorce settlement, his ex-wife got half of the funds from any future Nobel win, so when Lucas picked up the prize in 1995, he forked over half of the cash to his ex.

Lucas must have been particularly irritated that the divorce settlement clause actually expired in 1995, so if he had nabbed the Nobel in 1996 he wouldn't have had to share his brainy booty.

Lucas could at least take comfort in knowing he was in good company. All of Albert Einstein's prize money from his 1921 win in physics went to his ex-wife, Mileva Maric.

4. At least this is equitable

Cambodian couple Moeun Sarim and Vat Navy had been married for 18 years when they decided to part ways last year. Husband Moeun accused his wife of infidelity, so he decided to take the whole "splitting everything 50-50" concept to its logical conclusion.

Moeun had his family come over and cut away half of the couple's 20' x 24' house. While his wife's half of the marital home remained standing, he deconstructed his own portion and carried the building supplies back to his parents' home.

5. Man really gets his wife's goat

Australian Steve Killeen managed to get his ex-wife's goat in their divorce. Literally. When Killeen and his wife split, he ended up with her pet goat, which he now takes for daily walks through Sydney.

Earlier this year, Long Island's Dr. Richard Batista made an odd request during his divorce: he wanted his allegedly unfaithful wife to return the kidney he'd given her.

Dr. Batista gave his wife, Dawnell, a kidney in 2001, and as part of the messy divorce he claimed that he would either like the organ or compensation of $1.5 million.

Legal scholars were skeptical of Batista's request given that a) organ donation is legally a gift, not a loan and b) losing her ex-husband's kidney would have been ruinous for Dawnell Batista's health. The court rejected Batista's claim earlier this year.

When hotelier Conrad Hilton married the younger Hungarian actress and beauty queen Zsa Zsa Gabor in 1942, the union raised some eyebrows. Eventually, Gabor got tired of Hilton and began sleeping with her stepson, Nicky.

Hilton and Gabor ended up divorcing in 1947, and she picked up $275,000 in the process. Gabor later joked, "Conrad Hilton was very generous in the divorce settlement. He gave me 5,000 Gideon Bibles."

Prolific Belgian author Georges Simenon requested an odd stipulation in his 1949 divorce from his wife Tigy. Simenon's ex got a large alimony, one she later said was comparable to a top executive's salary during the 1950s, but she had to live no more than six miles away from Simenon so he could always see his children.

In 1980, Peter Sellers was in the process of divorcing his fourth wife, Lynne Frederick, when he dropped dead from a sudden heart attack at the age of 54.

Unfortunately for Sellers' children, their father hadn't gotten around to amending his will to reflect his cooling feelings for Frederick, and the divorce was not yet finalized. As a result, Frederick inherited Sellers' £4.5 million ($7.3 million) estate and the rights to all of his work, while the Sellers children got a meager £750 ($1,213) each.

Within six months Frederick was married again, this time to celebrity journalist David Frost, but that union only lasted a year.

10. Charles and Diana's divorce Is a royal pain

When Prince Charles and Princess Diana divorced in 1996, there were all sorts of odd assets to divvy up. For starters, there was the issue of titles. Diana lost the right to be called "Her Royal Highness," a move that peerage experts said was unprecedented.

She did, however, retain the right to live in Kensington Palace, her jewelry, and the right to entertain at St. James's Palace with the Queen's permission. While Diana also picked up a financial settlement of $22.5 million, she lost a variety of honorary military titles as well.